Intel's strategy for developing the Optane SSD 900P is the same they used for the SSD 750 in 2015. Both products are consumer-oriented derivatives of the flagship enterprise SSD of their time. As with the SSD 750, this has resulted in the Optane SSD 900P being a physically large and power-hungry drive that can't come close to fitting in the M.2 form factor used by most other consumer PCIe SSDs. The controller alone on the Optane SSD 900P is too large to fit on a 22mm-wide M.2 module, and its idle power draw of 5W is more than most M.2 PCIe SSDs draw under load. 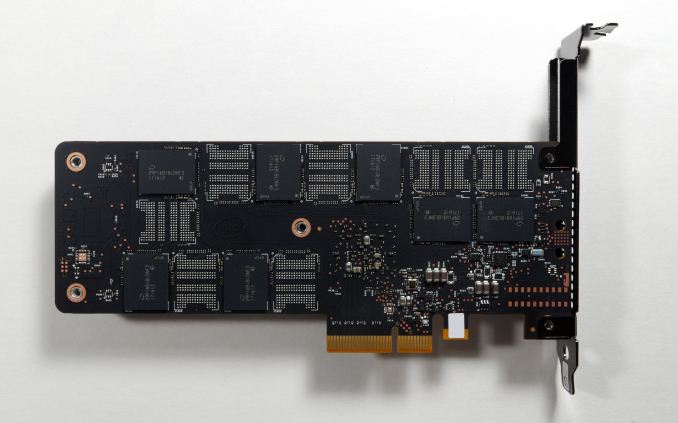 The Optane SSD 900P shares the same platform as the enterprise Optane SSD DC P4800X. It uses the same Intel controller with a PCIe 3.0 x4 link to the host system and a seven channel interface to the 3D XPoint memory. The P4800X is available as a 375GB drive that uses four dies per channel for a raw capacity of about 448GB. The 900P uses three or five dies per channel and similar overprovisioning ratios to offer usable capacities of 280GB and 480GB from raw capacities of about 336GB and 560GB. Because 3D XPoint memory supports direct read and in-place write operations with bit granularity instead of being constrained by the page and block structure of NAND flash memory, the Optane SSD 900P isn't using the extra capacity as spare area for any garbage collection process and is likely instead devoting most of it to error correction overhead and metadata.

The odd capacities and channel counts of the Optane SSD 900P aren't a requirement for using 3D XPoint memory so much as they are a consequence of Intel's performance and power targets for the drive. However, the use of 3D XPoint memory does lead to a few striking hardware design differences from flash-based SSDs. The Optane SSD 900P does not have any DRAM cache. On a NAND flash-based SSD, this would be a major red flag indicating reduced performance, even when mitigated by the NVMe Host Memory Buffer feature. Flash-based SSDs need quick access to the mapping tables that track which logical blocks are stored in which physical pages. 3D XPoint memory, on the other hand, is much simpler to manage, with no need for garbage collection and little or no need for wear leveling, and the storage medium itself is far faster. This makes the large DRAM buffer unnecessary.

The lack of buffers seems to also extend to the individual 3D XPoint chips themselves. NAND flash dies include page-sized RAM buffers as intermediate storage between the controller and the flash memory array. This allows the controller to transfer the payload data for a write command to the NAND die and then move on to issuing other commands to other dies on the same memory channel (or other planes on the same die) while the relatively long NAND program operation is happening. This multiplexing of operations within a single memory channel is a large part of why flash SSDs tend to be faster at higher capacities even within the same product line with the same SSD controller. The Optane SSD 900P accesses its 3D XPoint memory more directly and read and write operations are completed synchronously without an intermediate buffering stage. This means that the 280GB and 480GB models have essentially the same performance, and this same level of performance could in theory extend down to a one die per channel configuration that would offer 112GB raw capacity and 96GB usable capacity (and could be profitably sold for under $180).

While the lack of RAM buffers on the Optane SSD doesn't bring any major performance problems, it does have one minor downside. Flash-based SSDs are able to aggressively take advantage of their buffers to accept write operations almost as fast as the PCIe link allows for, so the Optane SSD 900P doesn't have much room to improve peak write speeds beyond what the 3D XPoint memory itself can sustain. However, the Optane SSD can continue providing those write speeds long after a flash-based SSD would have stalled to let the flash catch up to the controller.

The last major implication of the DRAMless design of the Optane SSD 900P is that large banks of capacitors are unnecessary to provide power loss protection. The Intel SSD 750 was one of the few consumer SSDs to offer enterprise-grade power loss protection, but those capacitors added to an already high BOM and were probably only kept to save the effort of more significant firmware changes relative to the enterprise SSDs it was based on. With the Optane SSD 900P, Intel gets to retain power loss protection on the consumer version more or less for free. This allows the Optane SSD 900P to avoid the consequences of Microsoft's stupid NVMe driver write cache policy defaults, which severely curtail the write performance of consumer NVMe drives that have volatile write caches. (Our client SSD test protocol uses the more reasonable but non-default write buffer policy for all Windows-based tests, so this advantage doesn't show up in out performance charts.) 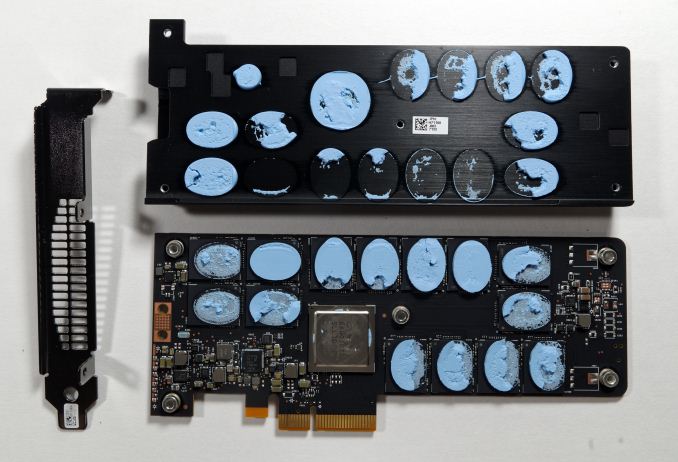 When an SSD vendor makes consumer and enterprise drives based on the same controller platform, there are usually major firmware differences to optimize for different performance requirements. Consumer SSDs tend to use SLC write caching to offer better burst write performance while enterprise SSDs tend to avoid it to offer more consistent performance. There are few opportunities with the Optane SSD to tweak performance between the consumer and enterprise versions, but there are several features from the P4800X that have been omitted from the 900P. The only one that has any performance impact is the ability to reformat the P4800X to use a 4kB logical block size instead of 512 bytes; the 900P only supports 512B sectors and doesn't support end-to-end data protection. The 900P also omits the SMBus interface for out of band management and doesn't include the diagnostic LEDs.

The most significant functional difference between the P4800X and the 900P is the endurance rating, which has been reduced from 30 drive writes per day to 10 DWPD. That's still a very high figure for a consumer SSD, but Intel's policy of putting the drive into read-only mode when the rated endurance is reached can be a nuisance, and it'll be encountered sooner on the 900P. The difference in write endurance is proportional to the price difference between the 900P and the P4800X, so the de-rating isn't too unfair. Overall, the Optane SSD 900P is still the closest a consumer SSD gets to offering enterprise SSD performance and features, and the 900P will probably cannibalize some P4800X sales.

Note that our usual set of power measurements is unavailable due to an equipment failure. The Optane SSD 900P will be re-tested once we have a new power meter, and the results will be posted to the SSD Bench database. In the meantime, rest assured that the Optane SSD 900P won't win any awards for efficiency.

Who is the Optane SSD 900P for? AnandTech Storage Bench - The Destroyer
Tweet
PRINT THIS ARTICLE
Comments Locked