Although ASUS and Sapphire cryptocurrency mining cards were officially outed last week, other pieces of evidence have suggested other vendors were also producing cryptomining cards. Both the GPU manufacturers (AMD and NVIDIA) and their board partners have remained tight-lipped, with only ASUS announcing via press release about their cryptomining hardware endeavors. Since then, product pages for cards have emerged for Manli, Zotac, and Biostar.

Manli, a PC Partner sub-brand focused on the Asia/China region, has listed product pages and datasheets for two cryptocurrency mining cards and one mining system containing many cards: the P106-100 Mining Card (F336G), the P106-100 Mining Card (F347G), and GPU Mining System (M-P1061008-N). Meanwhile, Zotac, another sub-brand of PC Partner more familiar in the West, has listed a product page on its Chinese website for P106-100; the English/Global site does not have the page. And as covered earlier, Biostar outed their VA47D5RV42 (Mining) card, a custom version of the China-exclusive AMD Radeon RX 470D.

Both Manli P106-100 cards are roughly equivalent to the NVIDIA GTX 1060 6GB, equipped with the same GP106 GPU at GTX 1060 reference clocks alongside 6GB of GDDR5 VRAM. Both are outfitted with custom two-fan open air coolers, and lack display outputs. At a glance, the F336G variant appears to have the same cooler as the Manli GTX 1060 6 GB (F336G), albeit without stickers or labels, while the F347G resembles the Manli GTX 1060 Gallardo. Interestingly, the package size for both cards is noted as ‘bulk pack,’ as opposed to the typical box dimension measurements for Manli’s other graphics cards. This indicates that the products are purchased in bulk and are not packaged or intended for individual sale.

Moving on, Manli’s GPU Mining System (M-P1061008-N) is a pre-assembled mining rig with 8 preinstalled passively-cooled ‘Nvidia P106-100 mining cards’ and an optional 1600W PSU. A mobile Intel Celeron CPU runs the system, accompanied with 1 stick of 4GB DDR3 and a 64GB mSATA SSD with an optional Windows 10 installation. The custom motherboard has 9 PCIe x16 slots and 7 12V 6pin connectors, all cooled by 10 9cm 4500RPM fans. As for outputs, the rig has an HDMI port, a ‘Giga LAN’ RJ45 port, and 2 USB 2.0 ports. Essentially, the system looks like a server, and certainly will make a noise like one.

Like Manli’s GP106-based cards, Zotac’s P106-100 is reference clocked but has display outputs. Even though the card (shown below) has physical output connections, the web page says that the card does not support any output, suggesting that these outputs are not connected (or it's the wrong image). It seems like Zotac rehashed (no pun intended) the preexisting Zotac GTX 1060 6GB Galaxy HB two-fan custom cooler for the P106-100 mining card. In fact, as careful readers will notice, the Zotac P106-100 custom cooler closely resembles the Manli F336G card coolers. As Zotac and Manli are sub-brands of PC Partner, this commonality is entirely reasonable, and perhaps expected. 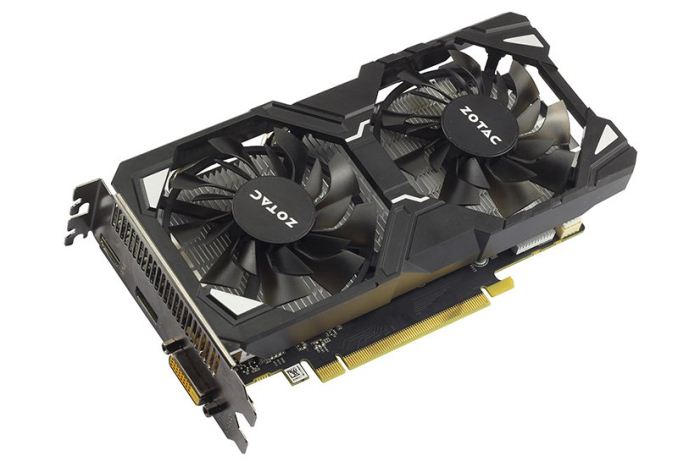 Summing up the companies, Manli, Zotac, and Biostar join ASUS and Sapphire in officially releasing mining-specific video cards. Relatedly, China-only P106-100 mining cards from MSI and Galax were shown in an unboxing video last week. In total, most of the world’s largest graphics card vendors are releasing cryptomining cards, with PC Partner represented through Zotac and Manli, and Palit being represented by sub-brand Galax. Given that Manli and Zotac appear to have utilized the same GTX 1060 custom cooler, it is not unreasonable to expect a mining card from PC Partner's third sub-brand, Inno3D. Yet with all the hardware out and about, only ASUS has packaged and announced products for individual sale: the MINING series. Otherwise, it is clear that there is a heavy focus on the Chinese market and on large-scale bulk purchasers. 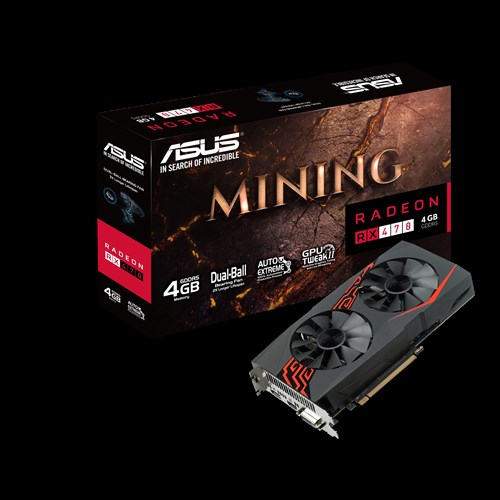 These trends bring up a number of points. Board partners are not aggressively attacking the traditional consumer market with these cards, preferring to keep quiet publicly. If it turns out that mining demand is centered on China, segmenting the market this way isolates the lucrative US and Europe spheres from mining card contamination and bad publicity. Likewise, if mining demand is indeed centered on distributors, organized groups, and bulk purchasers rather than hobbyist cryptominers, standard consumers are shielded in the same way while the problem is solved out of the public eye.

In context, manufacturers are still dealing with the same issues brought up in our first cryptocurrency mining cards article: overproduction leading to oversupply, RMA/warranty concerns, sales cannibalization by way of old inventory and a flooded secondary market, and brand damage (e.g. used cards in poor health, association with mining farms).

The overproduction issue has been misinterpreted by some to mean that production is maxed and so manufacturers are incapable meeting inflated demand, which is incorrect because they are capable. Much of the problem is the turnaround time, as the time between the decisions to increase production and the extra products hitting the shelves are in the order of several months or longer. In addition, increased production would last for a minimum of several months. Depending on how severely supply is starved, board partners might be waiting on AMD and NVIDIA, who themselves might be waiting on GlobalFoundries and TSMC, before they can even stick the GPU on a custom PCB and cooler, not to mention putting it in a box and shipping it out. For something as volatile as cryptocurrency mining, a currency crash during those in-between months would be catastrophic. Ordering higher production is relatively easy; getting rid of excess unsellable inventory because demand crashed too soon is hard.

For mining-specific cards, the stakes are doubled, as excess niche mining cards would be even more difficult to sell. In that regard, ROI-focused cryptominers take into account the inherent resale value of consumer graphics cards. If mining SKUs are too enticing for cryptominers, so much that consumers start to partake, manufacturers have to deal with market segmentation headaches and lower average selling prices. But if mining SKUs are not enticing enough for cryptominers, hobbyists or otherwise, miners will instead keep purchasing consumer cards, leaving board partners with unsold inventory of niche products on top of having no supply to satiate annoyed non-mining consumers. The consequences for that hypothetical failure are less dire outside US/Europe, while mining card success in China would presumably give vendors valuable experience in how to properly market and produce mining cards in the US/Europe. Similarly, producing bulk amounts of brown box cards for distributor back-channels ensures that inventory keeps selling without the risk of adversely affecting the consumer market. And if that resolves the mining demand problem right there and then, then all the better for them – and us.