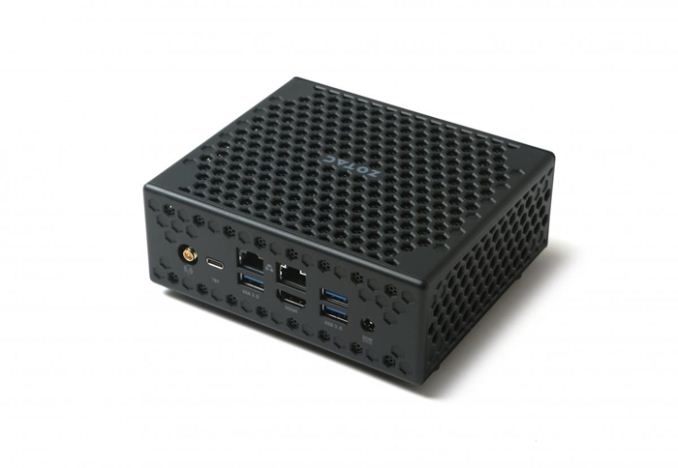 As part of their pre-CES teaser, Zotac had talked about their mini-ITX GTX 1080 and their external Thunderbolt 3 graphics dock. They had also hinted about some updates to the ZBOX lineup, with some details about the ZBOX CI549 nano, a vPro-enabled passively cooled UCFF (ultra-compact form factor) PC with Thunderbolt 3 support. However, at their suite, we found that many of their existing ZBOX models will be getting a Kaby Lake update. Since Kaby Lake is a minor update in terms of features to Skylake, the Zotac really doesn't have much to work with compared to the Skylake models. Despite that, Zotac has introduced some new features into the ZBOX series - including vPro and Thunderbolt 3 support - that are not present in the Skylake versions.

Zotac markets their mini-PCs in multiple market segments - the E-series for gaming, the C-series for users interested in passively cooled systems, the M-series for certain PCs with active cooling in multiple form factors, the VR-series for virtual reality use-cases, the P-series for pocket-sized computers, and so on. The Kaby Lake updates are coming to the C-series, M-series, and E-series. While the C-series units come with the nano tag (with a 5in x 5in x 1.78in form-factor), the M-series come in either the regular ZBOX size (7.4in x 7.4in x 1.78in) or the nano size.

The three tables below summarize the specifications of the Kaby Lake mini-PCs announced by Zotac at CES 2017.

The most interesting one in the above table is obviously the Zotac ZBOX CI549 nano / MI549 nano. From the perspective of a home consumer, the most important update when compared with the Skylake-U C Series models is the availability of a Thunderbolt 3 port. Thunderbolt 3 brings a host of exciting expansion possibilities. In addition, Zotac seems to have retained the two USB 3.1 Gen 2 Type-C from the ASMedia ASM1142 controller. 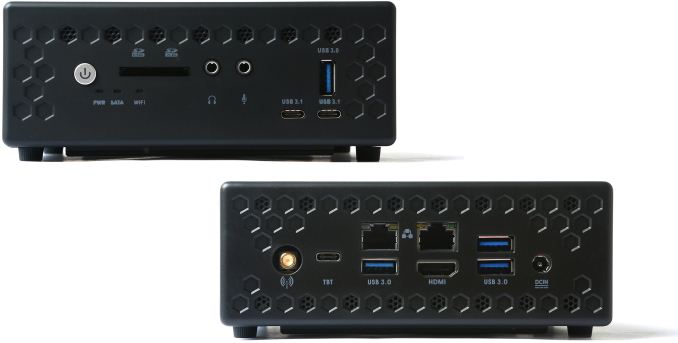 The other important aspect of the ZBOX CI549 nano and the MI549 nano is that the Core i5-7300U is a vPro SKU, making it more suitable for use in business environments. Intel's UNITE technology is also supported for secure workplace conferencing. AMT is also available for IT administrators to remotely repair and maintain the systems. The vPro designation makes it necessary for one of the two LAN ports to be an Intel-branded one. The other mini-PCs being updated with Kaby Lake in the above table all use two Realtek adapters.

The interesting ZBOX here is the MI572, with the 35W TDP LGA processor - the Core i7-7700T. Using a desktop PCH allows Zotac to include Thunderbolt 3 as well as a rich set of I/Os compared to the others launched at CES.

In the E-series, Zotac has only one updated SKU - the EN1070K, a Kaby Lake version of the EN1070. We would have liked them to move the MAGNUS EN1080 to Kaby Lake, given the pin compatibility between Skylake and Kaby Lake, and the fact that the PCH used for the Skylake board could work with Kaby Lake too.

Given the nature of the mini-PC market, and the updates offered by Kaby Lake, we believe Zotac is doing the right thing by not going in for a complete overhaul of their Skylake-based offerings in this space. It is great to see dual LAN ports spread to more models, though we would prefer Intel adapters to the Realtek ones that are currently in the units. Zotac must also be appreciated for adding the LSPCon to the BOM to enable HDMI 2.0 and HDCP 2.2 capabilities. The Thunderbolt 3 feature, as well as the vPro capabilities, will definitely expand the target market for these systems. That said, some of the shortcomings such as the thermal design of the C-series (which is the same as that of the Skylake C-series) and the placement of the USB ports in the chassis (that we pointed out in our review of the Zotac ZBOX CI523 nano) don't seem to have been addressed. Hopefully, Zotac can tweak a few things before the final market release.