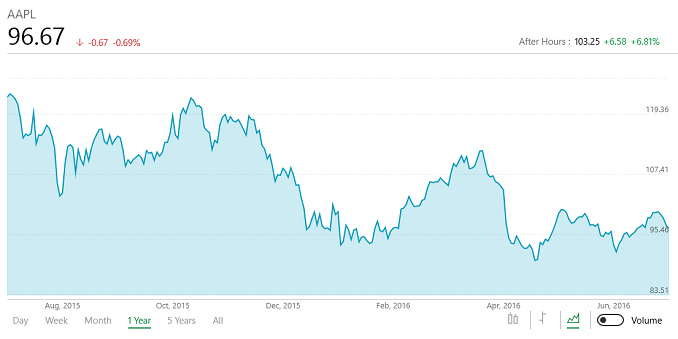 Today Apple announced their third quarter results for their fiscal year 2016. Much like last quarter, Apple has struggled to maintain the sales pace of the iPhone 6s, compared to the iPhone 6. For the quarter, Apple had revenues of $42.358 billion, which is down 11% from a year ago. Gross margin was $16.106 billion, down from $19.681 billion in Q3 2015, and percentage wise it is 38.0%. Operating income was $10.1 billion, down from $14.1 billion last year, and net income was down almost $3 billion to $7.8 billion. Diluted earnings per share were $1.42, down from $1.85 a year ago. Despite the lower quarter, Apple did beat expectations which has helped their share price in after-hours trading.

Apple announced a dividend of $0.57 per share payable on August 11th to shareholders of record as of August 8th. They also returned over $13 billion during Q3 through share buy-backs and dividends, and they have completed almost $177 billion of their $250 billion capital return program.

iPhone sales are far and away the largest part of the company, and this quarter Apple sold 40.4 million handsets. That is down from the 51.2 million last quarter, and 47.5 million in Q3 2015, meaning iPhone sales were down 15% year-over-year. This resulted in revenue of $24 billion, down 23% from a year ago. It’s certainly a noticeable drop, and it shows just how successful the iPhone 6 was when it launched.

Moving on, iPad sales continued their slow and steady decline. Sales of the tablet were just a hair under ten million for the quarter, which is a drop of 9% year-over-year. Revenue was $4.9 billion, which is up 7%. A year ago, the average selling price of the iPad was $415, but this quarter, average selling price for the iPad rose $85 to $490. Declining sales of the iPad Mini, as well as new sales of the higher priced iPad Pro are certainly the case, but Apple doesn’t break out the numbers for individual models to know just how much each was a factor.

The Mac didn’t fare very well either, with unit sales of 4.25 million, which is down 11% year-over-year. This resulted in revenue of $5.24 billion, down 13%. With basically no Mac refreshes in a long time, they are no longer outperforming the PC market as a whole, which was the case for the last while.

Apple’s “Other Products” includes Apple TV, Apple Watch, Beats, iPods, and accessories, and while none of this is broken down by sub-category, the Other Products as a whole also fell 16% in revenue compared to Q3 2015, with revenues for this quarter of $2.22 billion.

The one segment in which Apple had strong growth was their Services segment. Services grew by 19% compared to Q3 2015, with revenue of $5.976 billion, which is up almost a billion or 19% year-over-year. Q2 2016 revenue was pretty much the same at $5.991 billion, meaning services have once again outpaced both Mac and iPad sales, and now represent the second largest segment at Apple.

Overall, it’s the second consecutive quarter of revenue loss, and last quarter was the first time that happened since Q1 2003, so Apple is in somewhat unfamiliar territory. Their guidance for next quarter is $45.5 to $47.5 billion, and margins between 37.5% and 38%. That guidance is also for a loss of revenue, since Q4 2015 had the company coming in at $51.5 billion, and 39.9% margins. It will be interesting to see if hardware refreshes in the fall can stop the drop in sales.