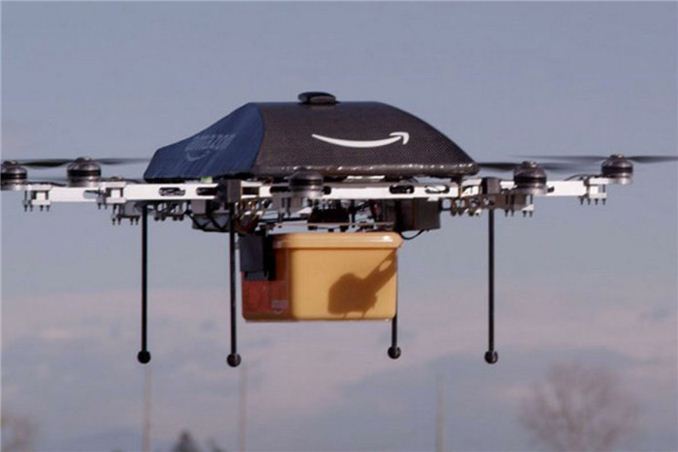 This past weekend, just in time for Cyber Monday, Amazon CEO Jeff Bezos revealed plans on 60 Minutes for delivery drones for Amazon Prime shipments weighing up to five pounds. While the target of getting drones involved in the next five years sounds ambitious, there are many questions and technological obstacles that need to be overcome first. Taken at a high level, Amazon states that the drones could handle up to 86% of all Amazon shipments, getting product to your door as quickly as 30 minutes after you place your order. If that sounds too good to be true, it probably is for most of us. People that live in densely populated areas would be the first target I would guess, with the service potentially spreading to other areas as it becomes feasible. Amazon would need to have warehouse locations within 10 miles of your office/residence to be within range, and they would need dozens if not hundreds of the drones at each location to handle the packages.

The timing of the broadcast is particularly telling, as Bezos noted that they have around 300 items ordered every second on Cyber Monday. That creates a lot of work for the shipment side of the business, but even if Amazon only tried to ship 10% of the packages by drone on such a busy day we'd be looking at 30 packages per second, an average delivery time of perhaps 20 minutes (1200 seconds), probably another 10 minutes for “refueling” (600 more seconds), and thus a drone fleet numbering 54,000 would be needed. If all orders were to be delivered by drones, we'd be looking at ten times that number – over half a million drones.

Even assuming the physical presence could happen (at least for some areas), there remain many other obstacles: weather, operating cost, reliability, potential for vandalism/theft, FAA regulations, etc. The drones are technically octocopters, and they're already being used for taking pictures and filming. Pricing for an octocopter large enough to carry a five pound package is going to be pretty obscene as well – around $10,000 seems like a reasonable baseline, though with mass production it might be lower. Of course there's still the need for the facilities and personnel to run the operation, so $20,000-$30,000 per drone might be a more reasonable estimate.

I know Amazon ships a lot of packages, but the changes in infrastructure alone make this something that will likely take much longer than five years before we see it widely used. I suspect more likely is that the first use of the service by Amazon will be as an optional shipping method that will cost a premium. Amazon Prime members currently get free 2-day shipping on qualifying orders, with discounted 1-day shipping as well. How much would people pay for 30-minute shipping if it were available? In some cases, it might be $100 or more. If Amazon were to charge $100 for drone shipping, and a drone could make on average 15 deliveries per day (seven days per week), each drone could potentially pay for itself within a month...or at $50 per delivery, two months. If on the other hand this is a “free for Amazon Prime” service, we'd likely be looking at a year or two just to cover the cost of the drone (and assuming no equipment failures).

Regardless of when or how drone shipments take place, there's no arguing with the fact that it's a really cool idea. It's the sort of thing we see and read about in sci-fi, and as is often the case it's more a question of “when” rather than “if”. Having just traveled over 2000 miles via car for Thanksgiving to be with family, it's in the same category as fully automated vehicles. I personally hope to live to see the day where I can hop in a car, tell it to “take me to my mom's house”, and then sit back and relax (or work) as the vehicle zips along at 100MPH, coordinating travel with satellite monitoring and nearby vehicles so as to avoid slow-downs, accidents, and other potential problems. I think it's inevitable that the day will come when computer-controlled vehicles take over for humans, and Amazon's drones are yet another herald of such advancements. I for one welcome our new electronic overlords. :-)