Coinciding with today’s launch of the Radeon R9 270, AMD is announcing that they are putting up new video game bundles for their 200 series cards, the first such bundle on these cards since they started launching a bit over a month ago.

First and foremost, the R7 260X will be joining AMD’s Never Settle Forever Silver tier. This means the 260X gets 2 games from that tier (from a selection of 9 games), just as the 7800 series does today. Furthermore the tier itself is also being updated to coincide with today’s bundle launches; Eidos’s upcoming Thief game will be joining the Silver tier, giving 260X buyers (and all other Silver tier holders) the option of grabbing that game if they don’t mind a wait until February of 2014. 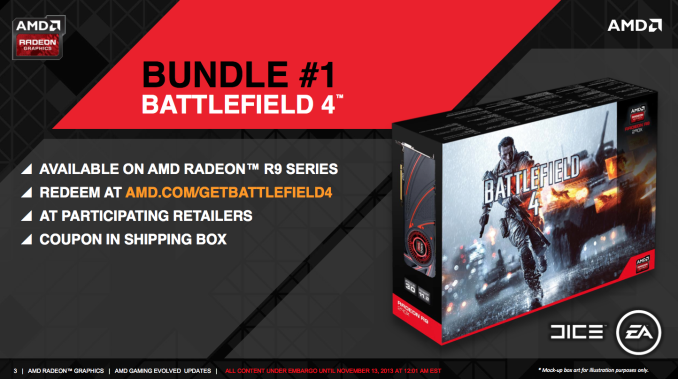 Meanwhile for the R9 270 and above, all 290 series, 280 series, and 270 series SKUs will be getting a Battlefield 4 bundle. This bundle is separate from Never Settle Forever – BF4 isn’t joining NSF – with all applicable cards receiving just BF4 and nothing from NSF. This is the same bundle that was previously being offered at a price premium on some 290X launch SKUs, so those premium 290X SKUs will be going way in favor of $549 BF4 bundles for everyone.

Battlefield 4 of course needs no introduction, being the latest game in EA’s popular line of military shooters. For AMD this means they’ve snagged one of the highest profile PC games of the year, and it means the pump will be primed for December when the BF4 becomes the first game to be Mantle enabled.

Unfortunately there does look to be one bit of bad news here, and that is that this bundle will not be retroactive in any way. Normally we wouldn’t expect this anyhow, but with the bundle coming just a week after the launch of the Radeon R9 290, the timing is unfortunate on AMD’s part since it means the 290 was on sale bundle-less for all of 8 days. But with that said, BF4 is something of an odd title to work with anyhow from a co-branding/marketing perspective. It’s not at all clear if EA would even allow their cash cow to be given away for “free” any closer to its launch, seeing as how it only launched a few weeks ago. 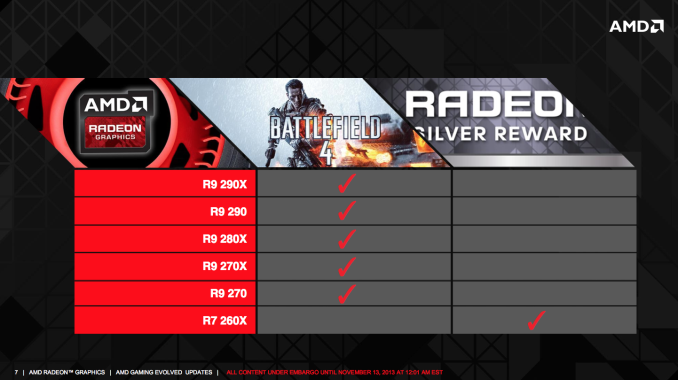 Ultimately this does at least settle the matter of if and when the 200 series would get a bundle. AMD initially left it bundle-less to take advantage of the early adopter window, while leaving a bundle on the 7000 series to help close out those cards. The inclusion of a bundle at this point would indicate that AMD is apparently satisfied with the progress on clearing out those old GCN cards, and/or sales of the 200 series have tapered off to a point where they need a bit more of an incentive. Regardless this means that we’ll have an interesting holiday bundle battle between AMD and NVIDIA, with AMD’s BF4 bundle going up against NVIDIA’s holiday GeForce game bundle. Considering both bundles apply to sub-$200 cards, this will make for one of the richer holiday bundles that price point has seen in quite some time.

Update (11/15): After getting back from APU13, we just got off the phone a bit ago with AMD. After checking on the status of the bundles we noticed that the Battlefield 4 bundles had yet to show up in force. As it turns out there’s a reason for this.

The long and short story is that this bundle is not going to be distributed like previous bundles. The Never Settle bundles were structured such that retailers were provided with vouchers and threw them in with all qualifying products. However with the Battlefield 4 bundle inclusion will not be universal; it will be up to the retailers and board partners to decide which cards to include the bundle with. Which as of right now is only a couple of XFX cards over at Newegg.

Unfortunately AMD wasn’t able to give us an in-depth explanation on why this bundle is being handled so different, though we strongly suspect this is a further complication of working with EA on such a high-profile game, since there’s no rational reason for AMD to do this to themselves. In any case there will be cards out there with the BF4 bundle, but while all cards technically qualify for the program, clearly not every retailer/partner is going to go ahead and do it. For their part, AMD is going to be setting up a tracking page in the near future over on their Battlefield 4 bundle promotional page, in order to help buyers find retailers with cards that come with the bundle.

On that note, while AMD is telling us that these bundles should not affect card prices, because these bundles are up to the retails there’s no real way they can entice or force retailers to hold prices. To use Newegg as an example, the only 290 card with BF4 is an XFX card that carries a $20 premium. It’s not clear whether this is Newegg’s doing or XFX’s doing, but it looks like we’re going to see some launch-like pricing shenanigans given the fact that the retailers and partners are holding more power than usual here.

Finally, AMD has responded at least in part to the concern over the fact that these bundles aren’t retroactive for the 290 cards, in the process confirming our earlier suspicions by saying that it was “due to contractual agreements with EA/Dice.” AMD can’t make the BF4 bundle retroactive, but they are going to be giving away 1000 copies of BF4 as a promotional event. Which admittedly won’t soothe 290 buyers, but given their contract with EA is likely the best they can do.