Moving on to the electronics of the 280X Toxic, Sapphire has equipped the card with their standard high-end “black diamond” solid chokes and solid capacitors. The use of solid state parts on high end cards is typical for everyone these days, so about the only thing that sets Sapphire apart here is the physical design of their chokes, which uses a number of fins to give their tops additional surface area for a heatsink-like heat dissipation effect.

Like some of the other 280X cards we’ve seen, Sapphire has gone with a 10 phase power implementation on their card to give the card more headroom on the power side, outfitting the card with 8 power phases for the GPU as opposed to the typical 5 phases, and the same 2 phase memory/IO setup. Sapphire is operating the card at an above-spec voltage of 1.256v, so the additional phases are crucial in delivering the higher wattage this card draws on to operate.

Also found on the card is a push-button BIOS selection switch for dual VBIOS functionality. For the retail cards one VBIOS will be for use with standard PC BIOS systems, while the second VBIOS will be for UEFI systems. Our press sample didn’t come with the UEFI VBIOS so we weren’t able to test that for this article. Of course the presence of the second BIOS also allows for safer BIOS modding, for those inclined to do that.

Overall, and with an immediate preface that I don’t have any reason to believe the shipping retail cards will be like this, the build quality on our press sample was relatively poor. As is sometimes the case this card was assembled by hand in order to get it to us early enough ahead of the retail shipments for today’s review. These hand assembled cards are hit and miss and in this case ours was a miss, with a pair of shroud screws having come out of place. The end result being that the tail end of the shroud (farthest from the GPU) wasn’t secured and could easily move several millimeters away from the card.

This didn’t impact our testing in any way, and we were able to fix the problem after fully disassembling the card. But it does highlight the fact that the only real weakness in Sapphire’s design is that the shroud isn’t mounted to the heatsink/PCB in enough points, particularly towards the rear. The retail cards will have the same limited number of mounting points, but given what’s happened in the past with other dodgy hand-built press samples I’m not expecting those cards to have the screw problem, though it is something we’ll be keeping an eye on as these cards hit retail.

Meanwhile overclockers will want to pay note that overclocking options on the 280X Toxic will be limited. The card has solid power delivery, however there isn’t any voltage control on the card – Sapphire Trixx, MSI Afterburner, and Asus GPU Tweak are unable to set a different voltage – so you can only overclock it as far as the default voltage will take you. In that respect Sapphire has clearly designed the card for stock operation as opposed to satisfying that end-user overclocking itch.

While we’re on the subject of overclocking, Sapphire’s Trixx overclocking utility works with this card out of the box, but unfortunately it hasn’t changed much since the last time we’ve seen it. It’s still competent at overclocking, but it lacks any good monitoring features, so anyone intending to chase overclocking will probably want to stick to Afterburner for this. 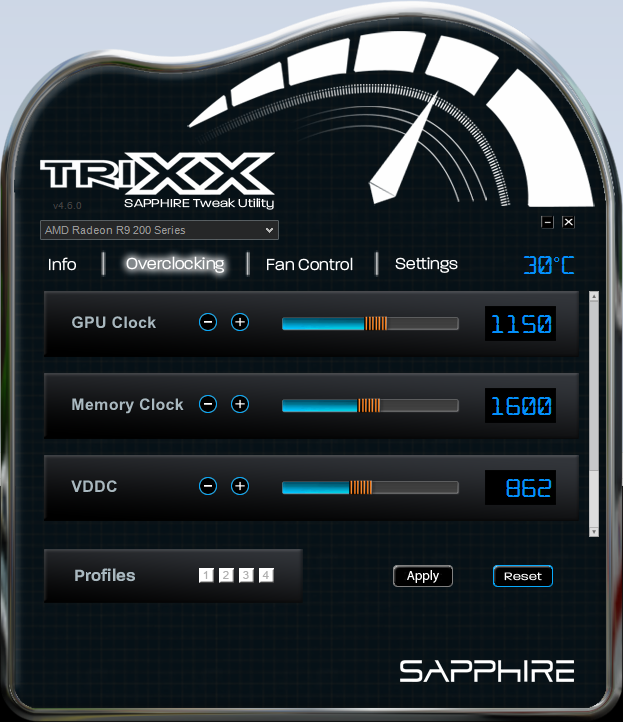 Moving on, let’s briefly talk about I/O and other connectivity. Sapphire has opted for the Radeon standard of 1x DL-DVI, 1x SL-DVI (physically DL-DVI), 1x HDMI, and 2x Mine DisplayPort 1.2 for connectivity, so the card should be able to easily drive anything thrown at it. Meanwhile at the top of the card are a pair of 8pin PCIe power sockets; though the card shouldn’t need more than 300W at stock, given the amount of power we do see it draw and the PowerTune limits when overclocked, the additional 75W offered by the second 8pin connector is a solid idea in this case. 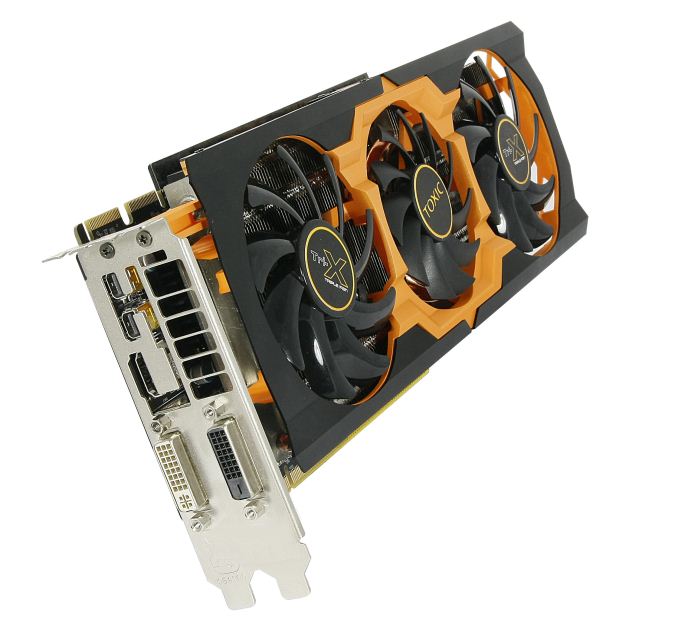 Finally, let’s quickly talk warranties and pricing. Sapphire is offering their standard 2 year warranty with this card, which although not particularly short does make it the shortest among all of the 280X cards we’ve looked at so far. Meanwhile pricing is what you’d expect for such a heavily overclocked card, with Sapphire releasing the card at $349, a full $50 (17%) higher than the MSRP for a stock 280X. The card is quite a bit faster than a standard 280X – 13% faster on average – so Sapphire isn’t out of line here, but they won’t be improving on the price/performance ratio over standard cards.