Dragging Core2Duo into 2013: Time for an Upgrade?

As any ‘family source of computer information’ will testify, every so often a family member will want an upgrade.  Over the final few months of 2012, I did this with my brother’s machine, fitting him out with a Sandy Bridge CPU, an SSD and a good GPU to tackle the newly released Borderlands 2 with, all for free.  The only problem he really had up until that point was a dismal FPS in RuneScape.

The system he had been using for the two years previous was an old hand-me-down I had sold him – a Core2Duo E6400 with 2x2 GB of DDR2-800 and a pair of Radeon HD4670s in Crossfire.  While he loves his new system with double the cores, a better GPU and an SSD, I wondered how much of an upgrade it had really been.

I have gone through many upgrade philosophies over the decade.  My current one to friends and family that ask about upgrades is that if they are happy installing new components. then upgrade each component to one of the best in its class one at a time, rather than at an overall mediocre setup, as much as budget allows.  This tends towards outfitting a system with a great SSD, then a GPU, PSU, and finally a motherboard/CPU/memory upgrade with one of those being great.  Over time the other two of that trio also get upgraded, and the cycle repeats.  Old parts are sold and some cost is recouped in the process, but at least some of the hardware is always on the cutting edge, rather than a middling computer shop off-the-shelf system that could be full of bloatware and dust.

As a result of upgrading my brother's computer, I ended up with his old CPU/motherboard/memory combo, full of dust, sitting on top of one of my many piles of boxes.  I decided to pick it up and run the system with a top range GPU and an SSD through my normal benchmarking suite to see how it faired to the likes of the latest FM2 Trinity and Intel offerings, both at stock and with a reasonable overclock.  Certain results piqued my interest, but as for normal web browsing and such it still feels as tight as a drum. 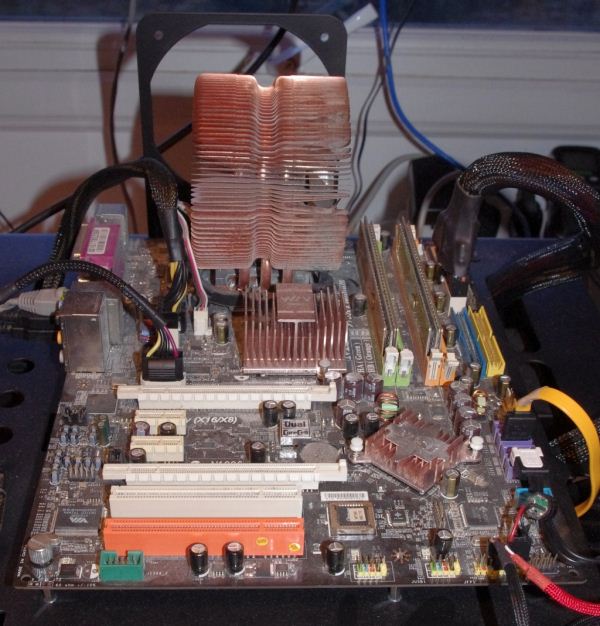 The test setup is as follows:

My recent testing procedure in motherboard reviews pairs the motherboard with an SSD and a HD7970/GTX580, and given my upgrading philosophy above, I went with these for comparable results.  The other systems in the results used DDR3 memory in the range of 1600 C9 for the i3-3225 to 2400 C9 for the i7-3770K.

Games were tested at 2560x1440 (another ‘throw money at a single upgrade at a time’ possibility) with all the eye candy turned up, and results were taken as the average of four runs. 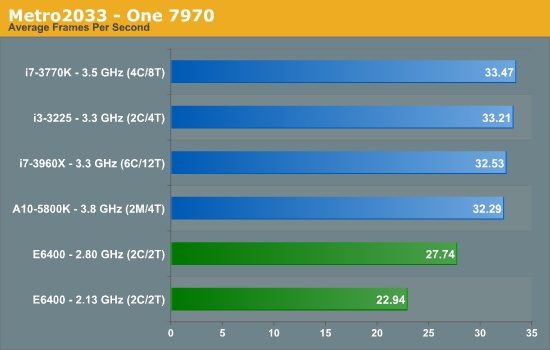 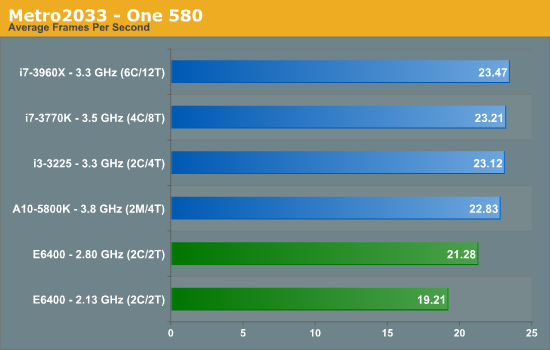 While an admirable effort by the E6400, and overclocking helps a little, the newer systems get that edge.  Interestingly the difference is not that much, with an overclocked E6400 being within 1 FPS of an A10-5800K at this resolution and settings while using a 580. 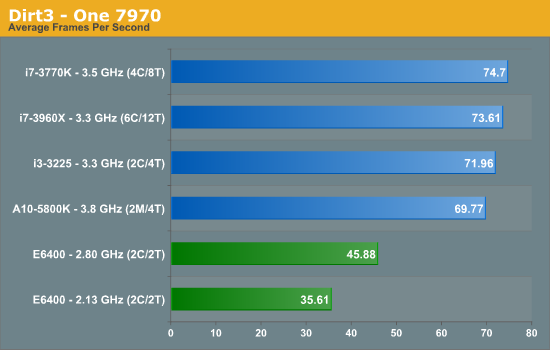 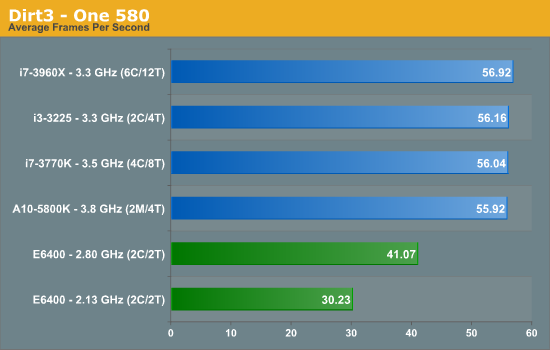 The bump by the overclock makes Dirt3 more playable, but it still lags behind the newer systems. 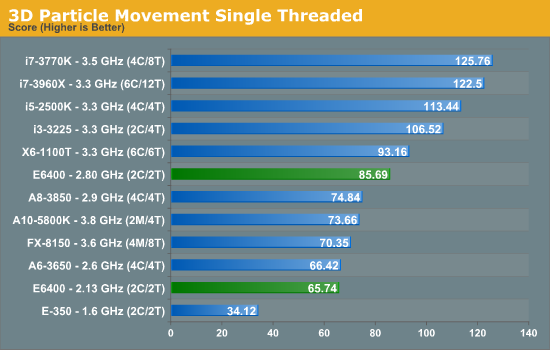 This is where it starts to get interesting.  At stock the E6400 lags at the bottom but within reach of an FX-8150 4.2 GHz , but with an overclock the E6400 at 2.8 GHz easily beats the Trinity-based A10-5800K at 4.2 GHz.  Part of this can be attributed to the way the Bulldozer/Piledriver CPUs deal with floating point calculations, but it is incredible that a July 2006 processor can beat an October 2012 model.  One could argue that a mild bump on the A10-5800K would put it over the edge, but in our overclocking of that chip anything above 4.5 GHz was quite tough (we perhaps got a bad sample to OC). 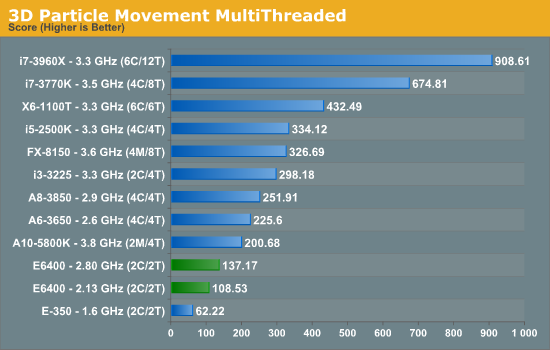 Of course the situation changes when we hit the multithreaded benchmark, with the two cores of the E6400 holding it back.  However, if we were using a quad core Q6600, stock CPU performance would be on par with the A10-5800K in an FP workload, although the Q6600 would have four FP units to calculate with and the A10-5800K only has two (as well as the iGPU). 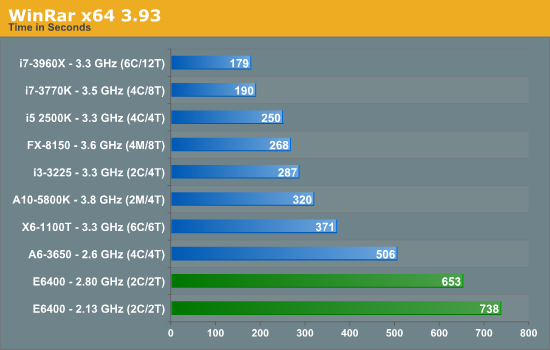 In a variable threaded workload, the DDR2 equipped E6400 is easily outpaced by any modern processor using DDR3. 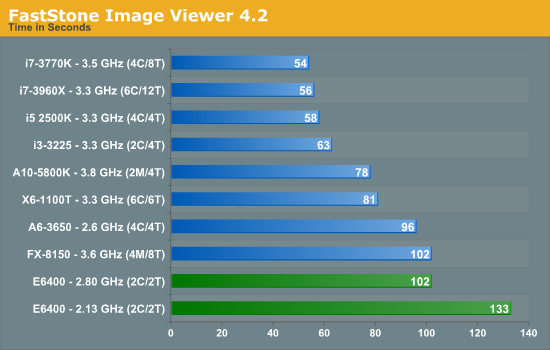 Despite FastStone being single threaded, the increased IPC of the later generations usually brings home the bacon - the only difference being the Bulldozer based FX-8150, which is on par with the E6400. 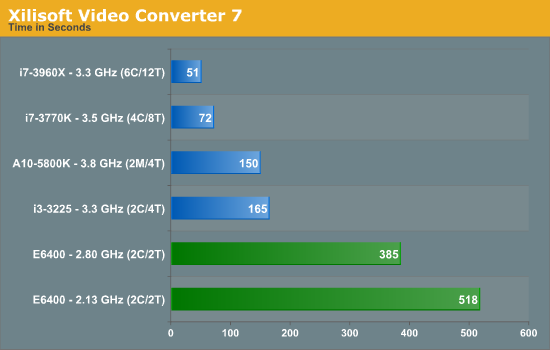 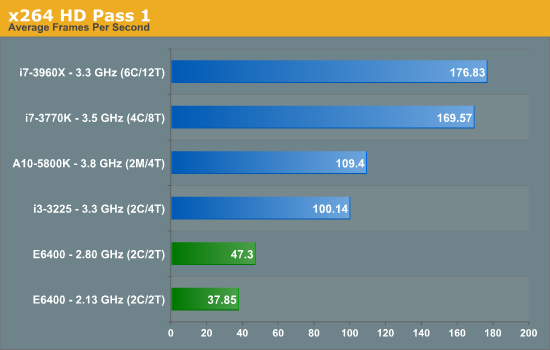 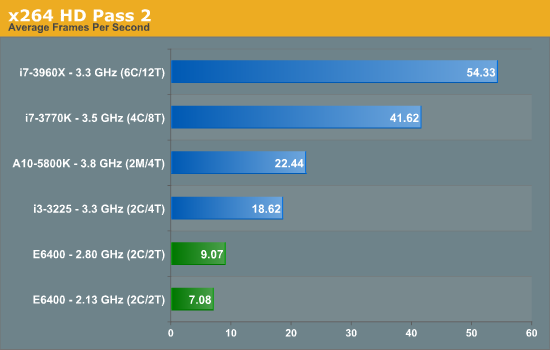 When I start a test session like this, my first test is usually 3DPM in single thread mode.  When I got that  startling result, I clearly had to dig deeper, but the conclusion produced by the rest of the results is clear.  In terms of actual throughput benchmarks, the E6400 is comparatively slow to all the modern home computer processors, either limited by cores or by memory.

This was going to be obvious from the start.

In the sole benchmark which does not rely on memory or thread scheduling and is purely floating point based the E6400 gives a surprise result, but nothing more.  In our limited gaming tests the E6400 copes well at 2560x1440, with that slight overclock making Dirt3 more playable.

But the end result is that if everything else is upgraded, and the performance boost is cost effective, even a move to an i3-3225 or A10-5800K will yield real world tangible benefits, alongside all the modern advances in motherboard features (USB 3.0, SATA 6 Gbps, mSATA, Thunderbolt, UEFI, PCIe 2.0/3.0, Audio, Network).  There are also significant power savings to be had with modern architectures.

My brother enjoys playing his games at a more reasonable frame rate now, and he says normal usage has sped up by a bit, making watching video streams a little smoother if anything.  The only question is where Haswell will come in to this, and is a question I look forward to answering.