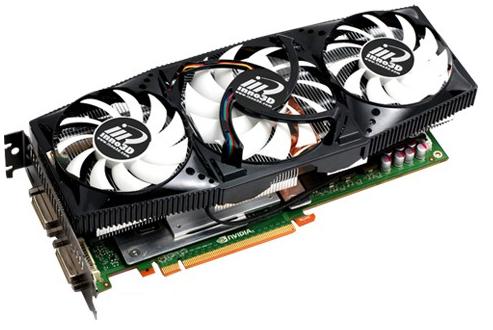 What we have is essentially an Arctic Cooling Accelero Xtreme cooler on top of a GTX 470 chip - three PWM controlled fans that run from 900 to 2,000 RPM on top of aluminium fins in a five-heatpipe design.  Inno3D claim the Hawk gives a maximum noise level of 30dB, and is 22ºC cooler than the reference design.  Two DVI-D connectors and a HDMI with integrated audio port are provided as standard.

This is, in our opinion, a bit of an ugly card (at least compared to the Galaxy 470 reported on earlier), that won't be taking home many beauty awards.  By taking up three PCI slots with a massive cooler, the Hawk may annoy those wishing to run other peripherals that require slots, or even running 2 or 3 in SLI, as the layout of most motherboards gives two slot spaces between PCI-E 2.0 x16 connectors.  The last caveat is that this card comes out the box at stock speeds, however, with any luck, Inno3D will also market a pre-overclocked version.