Despite the Z590 chipset being the premium option for Intel 11th Gen Rocket Lake processors, and the boards starting around $200, not every model is there to decimate the wallet. Every vendor has models designed for entry-level, mid-range, and even the flagship models - it's all a question of where the vendor thinks those delineated markets are. Some boards certainly have eye-watering prices attached to them, for example. Focusing on the mid-range segment, today we're taking a look at the ASUS TUF Gaming Z590-Plus WIFI. Its most prominent features include three M.2 slots, USB 3.2 G2x2 Type-C support, and a solid pair of networking controllers, including Wi-Fi 6E and 2.5 gigabit Ethernet.

Because there are multiple options in terms of processors, platforms, chipsets, memory, and storage, looking for the next upgrade can be difficult. Since Intel's competitors started taking market share, the rush is on to offer something above and beyond the competition. This is exemplified by the sheer number of options available for upgrades. Focusing on Z590, its secret sauce lies in the features from the chipset, including native USB 3.2 G2x2 Type-C support, double the DMI bandwidth (x4 to x8) of previous generations of Intel, and support for better networking support via Wi-Fi 6E.

Back in the day, TUF stood for ‘The Ultimate Force’ and was one the designation for ASUS’s robust series of motherboards. It spawned the Sabertooth series, clad in armor, looking clean, and offering superb value to users. ASUS decided to rebrand its TUF series back in 2017 to a more gamer-friendly brand, which is now known today as TUF Gaming. This series is designed to provide gamers with all the tools it needs to benefit from the performance. Still, ultimately, it sits as its entry-level to mid-range opener behind its core Republic of Gamers (ROG) models, with Strix sitting in the middle. 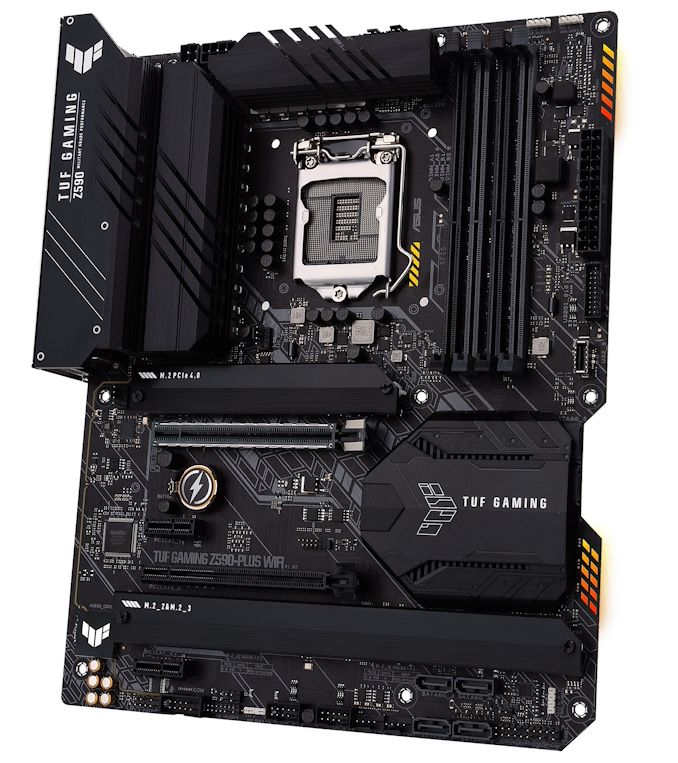 One such option available to users is the ASUS TUF Gaming Z590-Plus WIFI, which sits as one of the more affordable offerings but without sacrificing too much of Z590’s core feature set. When it comes to motherboards, money doesn’t go as far as it once did five years ago, and that’s due to multiple things, including more expensive yet better premium controllers, new features, and a general market shift which is apparent in the present climate.

Decked out from head to toe in all-black heatsinks, the ASUS TUF Gaming Z590-Plus WIFI has a simple yet well contrasted aesthetic, which includes a grey and black patterned PCB with integrated RGB LEDs on the right-hand side of the board. Interestingly from a design point of view ASUS is using its X-shaped cut-out around the SATA area, with two easily accessible right-angled SATA ports, in addition to four straight-angled SATA ports bringing the board’s total to six. Other storage options include one fully-fledged PCIe 4.0 x4 M.2 slot, with two additional PCIe 3.0 x4/SATA M.2 slots, which all benefit from ASUS M.2 heatsinks. Expansion support includes one full-length PCIe 4.0 x16 slot, with a second full-length PCIe 3.0 x4 and two additional PCIe 3.0 x1 slots.

Some of the ASUS TUF Gaming Z590-Plus WIFI’s primary features include WI-Fi 6 networking, in addition to one 2.5 gigabit Ethernet port, cementing that 2.5 GbE is becoming more and more frequent across the entry-level and mid-range over the last 9-12 months. ASUS also includes a premium HD audio codec and tapping into Intel Z590’s native USB 3.2 G2x2 Type-C support on the rear panel. With refinements to Intel’s Rocket Lake processors regarding memory, the Z590-Plus WIFI includes support for up to DDR4-5133 out of the box, with four memory slots providing capacities of up to 128 GB.

Focusing on performance, the ASUS TUF Gaming Z590-Plus WIFI performed competitively in our power testing, with respectable figures in long idle, idle, and at full-load. In our system POST time test, the ASUS did well, but in our DPC latency testing, we saw worse than average performance compared to other Z590 models on test. In our computational and gaming-focused tests, the ASUS again performed with credit and stretched its legs in our custom Crysis CPU render test. Other results did remain competitive with other Z590 models tested so far. 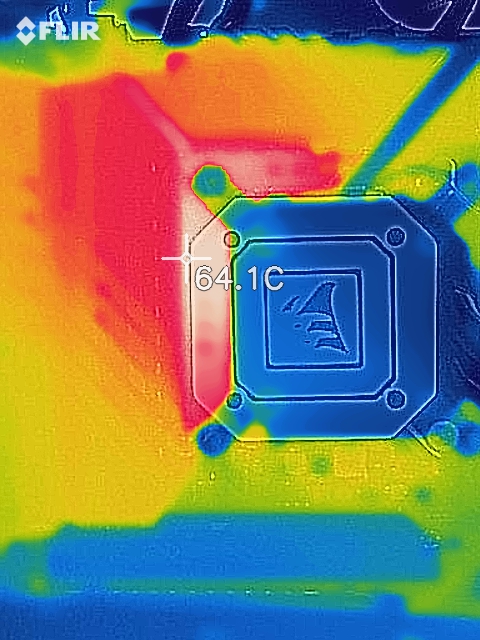 In our overclock testing, the board’s inability to hit 5.2 GHz all-core stable with our Core i9-11900K processor was somewhat disappointing. Even with a hefty 1.45 V on the CPU VCore, it just didn’t want to play ball, and we know this processor does 5.3 GHz in some motherboards. Regarding VDroop performance, we were mostly satisfied with what we saw. Despite the ability to hit 5.2 GHz stable, we feel that the TUF Gaming Z590-Plus WIFI represents its pedigree and price point. Our thermal VRM performance figures also put the ASUS in a positive light. It performed as we would have expected with a variance of between 66 and 71°C between the integrated thermal sensor and our K-Type thermocouples.

With a current selling price of $259 (at the time of writing), this puts the ASUS TUF Gaming Z590-Plus WIFI in the same price range as many other models. This includes the GIGABYTE Z590 Aorus Pro AX ($270), the MSI MAG Z590 Tomahawk WIFI ($270), and the ASRock Z590 Extreme WIFI 6E ($248). In the grand scheme of things, the ASUS includes Wi-Fi 6 over Wi-Fi 6E which is slightly disappointing given cheaper models from other vendors include this. ASUS does however include 2.5 Gigabit Ethernet, triple M.2, PCIe 4.0 support, which makes it competitive for the price. Although the aforementioned competitor's models include better onboard audio solutions, the ASUS and its lower price puts it in a solid position for users looking for a sub $300 model to build a Rocket Lake based system.

Read on for our extended analysis.