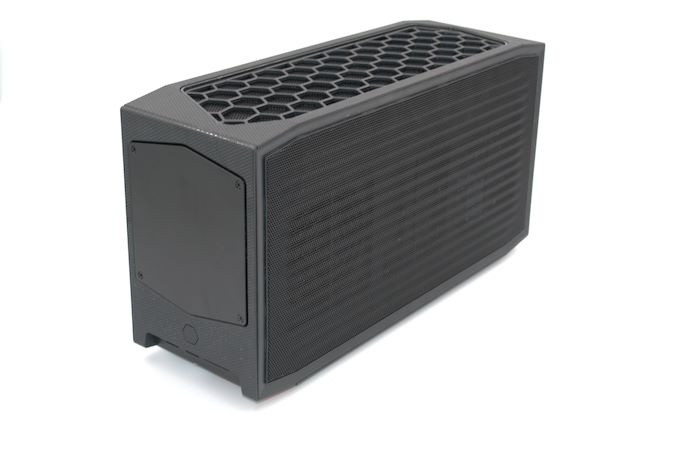 Intel kick-started a form-factor revolution in the early 2010s with the introduction of the ultra-compact NUCs. The systems were meant to be an alternative to the tower desktops used in many applications where the size, shape, and the system capabilities were mostly unwarranted. The success of the NUCs enabled Intel to start reimagining the build of systems used in a wider range of settings.

More recently, the introduction of the Skull Canyon NUC in 2016 was Intel's first effort to make a gaming-focused SFF PC. And desktop-focused Compute Elements (essentially, a motherboard in a PCIe card form-factor) launched in early 2020 meant that full-blown gaming desktops could credibly come under the NUC banner. Also last year, the Ghost Canyon NUC9 – the first NUC Extreme – made a splash in the market with support for a user-replaceable discrete GPU. Ghost Canyon was extremely impressive, but the restrictions on the dGPU size and high-end pricing were dampeners.

Thankfully, the introduction of Tiger Lake has enabled Intel to make multiple updates in its Compute Element lineup. Incorporating some tweaks and changes learned from their Ghost Canyon experience, Intel has now put forward its flagship NUC for 2021: Beast Canyon. With a desktop-class CPU and ability to accommodate most discrete GPUs in the market, the Beast Canyon NUC promises a lot. Does it manage to exorcise the ghosts of its predecessor? Our review below provides some answers.

Intel's lineup of gaming-focused NUCs started with the Performance series (Skull Canyon NUC6i7KYK and Hades Canyon NUC8i7HVK), before moving up the ladder to the Extreme series (Ghost Canyon NUC9i9QNX). The Beast Canyon, announced at the 2021 Computex, is taking over the flagship mantle this year. The important updates over the Ghost Canyon NUC include:

Intel supplied us with an engineering sample of the high-end SKU in the Beast Canyon line - the NUC11BTMi9 sporting the NUC11 Extreme Compute Element (NUC11DBBi9). This Compute Element is housed in a 357mm x 189mm x 120mm chassis. Traditionally, NUCs have been associated with the ultra-compact form-factor (100mm x 100mm in a 0.63L or 0.42L chassis). The introduction of the Skull Canyon and subsequent Hades Canyon NUCs created yet another class of 0.7L to 1.2L NUCs, and last year's Ghost Canyon took it up to approximately 5L. The need to accommodate the cooling solution of a more powerful Compute Element, along with the ability to accept large dGPUs contribute to the 8L volume of the Beast Canyon NUC chassis. This is still within the realm of SFF PCs - an adult can still single-handedly carry the unit around. Other important SFF aspects such as the in-built PSU are carried over from the Ghost Canyon NUC.

Intel's NUC lineup has traditionally included board and kit variants, allowing its partners to provide value additions (such as a passive chassis or additional I/O ports in the end system). Kits (other than the ones that come with a pre-installed OS) require the end-user to add storage, DRAM, and install an OS to complete the system. Intel plans to sell two varieties of the Beast Canyon NUC - the NUC11BTMi9 and the NUC11BTMi7. These two NUCs are kits based on the Driver Bay line of Compute Elements. OEMs and end-users can build their own NUC11 system based on the following components:

An off-the-shelf Beast Canyon NUC11BTM kit leaves only the DRAM, non-volatile storage, and discrete GPU to the choice of the end-user. Prior to the platform analysis and overview of our review configuration, let's take a look at the pre-decided components in the above list.

The NUC11BTMi9 we are reviewing today comes with the NUC11DBBi9 NUC11 Extreme Compute Element. It comes with a soldered processor - the Core i9-11900KB. This belongs to the Tiger Lake (11th Generation) family, and has a 8C/16T configuration with a 65W TDP. It can turbo up to 5 GHz. This Compute Element is a natural successor to the NUC9 Compute Element which re-imagined the traditional motherboard in a discrete PCIe x16 card form-factor. 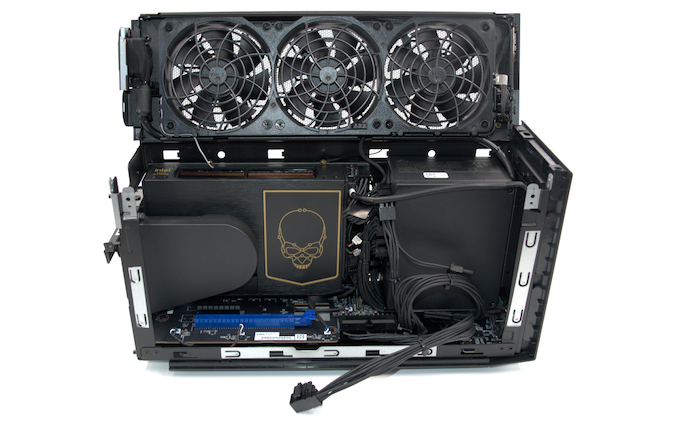 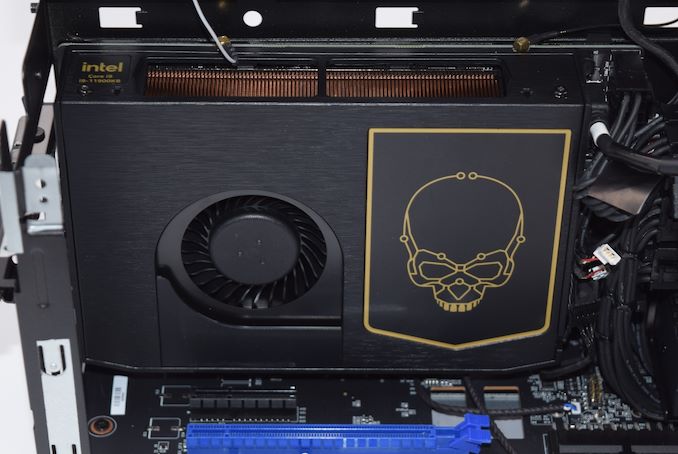 The Compute Element comes with a cooling shroud containing a single fan and three M.2 heat-sinks with thermal pads pre-attached. These align with the three M.2 2280 slots in the Compute Element. The slot to the right of the processor is enabled by the x4 Gen 4 lanes directly from the processor, while the two to the right (and the M.2 slot occupied by the WLAN card) are from the PCH. On the extreme right, we have the two SODIMM slots that can operate at speeds of up to DDR-3200 for DIMMs up to 64GB in total. These are vertical slots (compared to the horizontal ones in the NUC9 Compute Elements), and free up valuable space that gets taken up by the extra M.2 slot. The gallery below provides additional photographs of the Compute Element and the cooling shroud.

The NUC11BTMi9 comes with two Thunderbolt 4 ports, a 2.5G Ethernet port, a HDMI 2.0a display output, and six USB 3.1 Gen 2 Type-A ports in the rear. There are two USB 3.1 Gen 2 Type-A ports, a 3.5mm stereo headset jack, and a SDXC slot with UHS-II support in the front. The front I/Os are enabled by a daughterboard that connects to the headers in the Compute Element. The Compute Element has its own power connection to the PSU.

The baseboard used in the Beast Canyon (code name Monster Cove) is an evolutionary update to the West Cove board used in the Ghost Canyon. The PCIe lanes are now Gen 4, but they retain the x8 / x4 / x4 bifurcation capabilities designed into the previous generation. Thankfully, the M.2 22110 slot resulting from this bifurcation is now easily accessible from the underside of the chassis, without having to take out the Compute Element from the baseboard.

Similar to the West Cove board, the usage of either of the two x4 slots hard-limits the peripheral in the x16 slot to x8 bandwidth. This was an issue in our review configuration of the Ghost Canyon NUC, but the Beast Canyon has no such issues, as discussed further below. One of the downsides of the new baseboard compared to the West Cove is the placement of the vertical x4 PCIe slot between the Compute Element slot and the x16 slot. Due to the placement of the air guide above the Compute Element's fan (essential due to the 65W TDP of the resident CPU), the x4 slot is rendered unusable.

The NUC11BTMi9 chassis has the same ease of installation as the previous generation Extreme NUC. The dimensions have been expanded to allow the installation of dual slot GPUs up to 12" in length. The included 650W 80+ Gold internal PSU also supplies a 8-pin and a 2x6+2-pin connector for the GPU. The chassis can be disassembled by removing the four screws to dislodge the rear cover, and popping out the side panels. 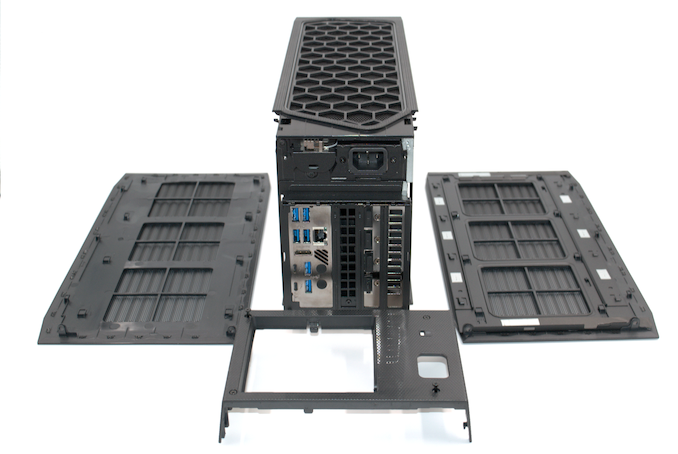 The top panel with the three fans rests on a hinge. The embossed directions in the frame helpfully guide the user to open it up. This is essential to get access to the Compute Element and remove its shroud to install the RAM and storage. 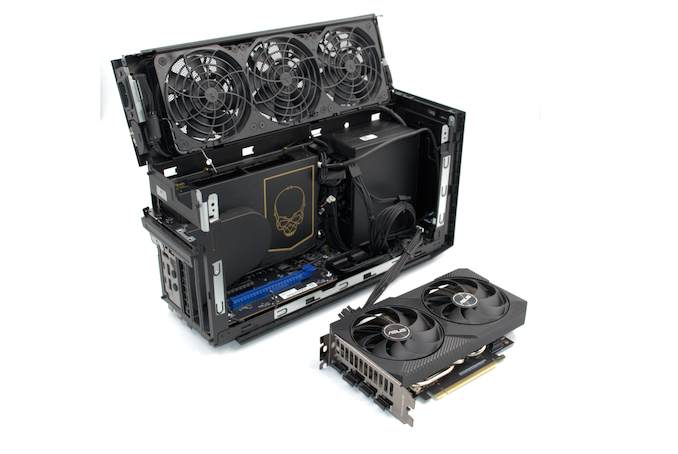 Despite the plastic framing in the front panel, the metal-based construction in other areas gives the chassis a premium look and sturdy feel. The Beast Canyon NUC chassis also features customizable RGB underglow lighting, as well as replaceable RGB front logo. The chassis has ample space inside for easy cable management even in the presence of a discrete GPU. These are updates over the previous generation NUC Extreme.

The chassis also has a few downsides. The front USB ports are recessed, and given their Type-A nature, figuring out the correct orientation to plug in the peripherals is a bit of a hit or miss. Certain keyboard / mice receivers can end up being completely inside the recess, making it challenging to remove them when the other USB slot is also occupied. The placement of the PSU AC receptacle on the top end of the chassis means that the heavy AC power cord could potentially create cable management issues. In both these aspects, the Ghost Canyon NUC chassis had a much better design.

Our review sample of the NUC11BTMi9 came with the following components pre-installed: 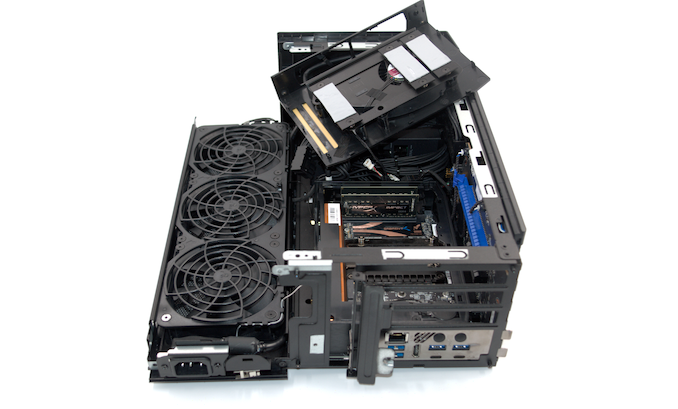 The presence of a desktop-class CPU in the system means that the Beast Canyon NUC should easily be able to support powerful GPUs such as the dual-slot RTX 3080 variants (even though we tested only with the RTX 3060). In the next section, we take a look at the full specifications of our review sample, followed by a detailed platform analysis along with some notes on our setup experience.