Although ASRock and ASRock Rack are similar in name, they are separate entities under the same company in the motherboard space. ASRock Rack by comparison caters to the workstation and server markets. The ASRock Rack W480D4U is an interesting model with its micro-ATX size, and support for both ECC and non-ECC memory up to DDR4-2933. Included are a pair of PCIe 3.0 x4 M.2 slots, eight SATA ports, dual Intel Gigabit Ethernet and an Aspeed AST2500 BMC controller. 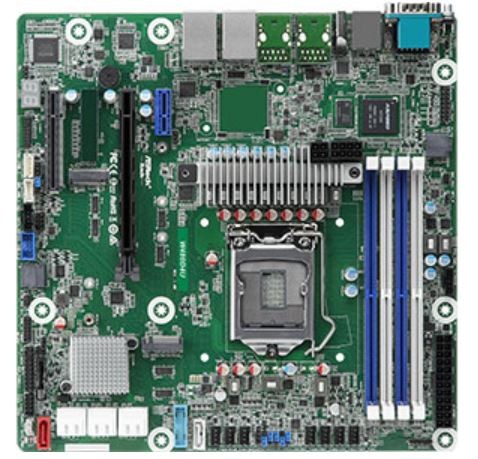 Sorry for the slightly blurry image, this is all that is currently available

Looking at the design of the ASRock Rack W480D4U, it isn't anything fancy with a standard green PCB, and blue and white memory slots. These four memory slots include support for up to DDR4-2933, both ECC and non-ECC modules are supported, and up to a maximum of 128 GB can be installed. There is a single full-length PCIe 3.0 x16 slot, with a half-length PCIe 3.0 x8 slot, and a single PCIe 3.0 x1 slot. Included on the board is an Aspeed AST2500 BMC controller which provides access to ASRock Racks intuitive interface and control panel. For storage, the W480D4U is using two PCIe 3.0 x4 M.2 slots with eight SATA ports with one port supporting SATA DOM, with all the SATA ports supporting RAID 0, 1, 5, and 10 arrays. The board is also equipped with seven 4-pin fan headers which are exceptional for a board of this size.

The rear panel includes two USB 3.1 G2 Type-A and two USB 3.1 G1 Type-A ports, with two Intel I20 Gigabit Ethernet ports, and a dedicated Realtek RTL8211E Ethernet port for the boards IPMI controlled by an Aspeed AST2500 BMC controller. Finishing off the rear panel of the W480D4U is a D-sub video output for the BMC, a serial port, and UID LED button.

The ASRock Rack W480D4U conforms more to what is expected from its workstation and server series of models, with its green PCB and unassuming controller set. The board doesn't include integrated audio which isn't a negative, and overall it packs a nice punch for a micro-ATX Xeon focused model with seven 4-pin fan headers, support for 128 GB of DDR4 memory, and dual Gigabit Ethernet.