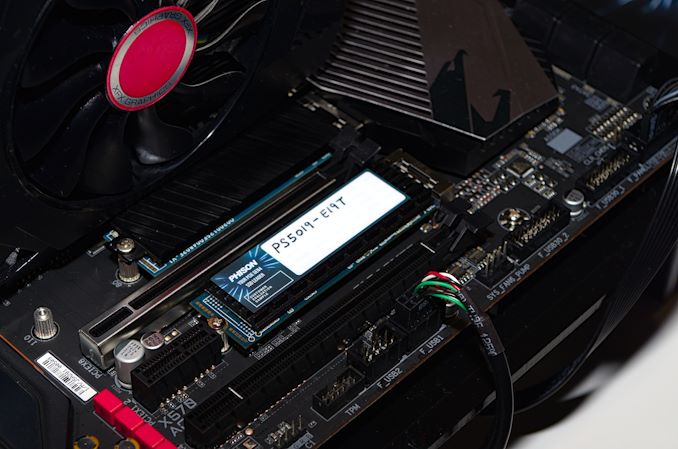 At FMS 2019, Phison shared the specs for its next generation of client SSD controllers. The PS5018-E18 high-end controller will be made using a FinFET process technology and promises to boost sequential read and write performance of drives to 7 GB/s. The PS5019-E19T mainstream controller will be a quick follow-up to the E13T that is currently in production but has not yet shipped in retail products.

With its PS5016-E16 chip, Phison was the first to introduce client SSD controllers with a PCIe 4.0 x4 interface and is currently enjoying its unique position on the market. The PS5016-E16 is essentially an update of the PS5012-E12 — still featuring two Arm Cortex-R5 cores, eight NAND channels rated at 800 MT/s and made using TSMC’s 28 nm process technology, but now featuring a PCIe 4.0 x4 PHY and enhanced error correction capabilities. In the coming months, Phison's entry-level NVMe controller will get a similar successor: the new PS5019-E19T will be based on the PS5013-E13T (one Arm Cortex-R5 core, four NAND channels, 28nm technology), but featuring a new PCIe 4.0 x4 PHY and thus enabling cost-effective yet fast SSDs.

The most important improvement in the new controllers is support for faster NAND interface speeds of up to 1200 MT/s. This is necessary to get full performance out of 96L and newer 3D NAND. For the high-end E18 this allows the controller to actually deliver twice the throughput of any PCIe 3.0 x4 drive, where the E16 can only use a fraction of the extra bandwidth provided by the PCIe 4.0 upgrade. The faster NAND interface also allows the E19T to hit sequential speeds that are slightly faster than a PCIe 3.0 x4 link can handle, despite the E19T having only four NAND channels instead of the eight channels used by high-end NVMe controllers.

Peak power consumption for both the E19T and E18 will be higher than for their respective predecessors, but that's because they are so much faster; the newer controllers will actually be more efficient.

Phison's booth at FMS included live demos of the E13T, E19T and E16 controllers, but the E18 controller was not in attendance. The low-end E19T controller will be sampling by the end of the year and is likely to show up in retail drives by the end of Q1 2020. This means that the E13T is likely to be very short-lived in the retail market. The high-end E18 will be arriving a bit later, sampling in Q1 2020 and hitting the shelves in Q3, a year after the E16 it replaces.