The Huawei MateBook X Pro Review: Calling Out The Competition

Huawei doesn’t seem to shy away from where they get their design inspirations, with the company proudly comparing it side by side with the latest MacBook Pro lineup. But they’ve still done some interesting takes on the Ultrabook design and have crafted a beautiful looking laptop with the MateBook X Pro. 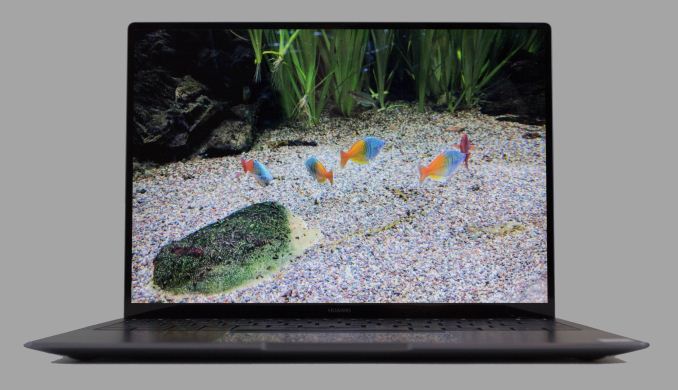 Obviously one of the focal points is the display, which is surrounded by bezels just 4.4 mm on each side. This makes for a pretty stunning look, and Huawei took a design cue from Dell here by shrinking the top bezel as well. There’s no doubt that it makes the laptop look more balanced, but in order to do this the webcam had to be relocated from the top of the display. Dell tucks it under the display, but with Huawei using a taller 3:2 aspect panel, they’ve instead moved the webcam under a pop-up key cap between F6 and F7. Clearly this is going to have the same up-the-nose look of using an XPS 13 webcam, but if you do want to adjust the angle of the webcam you’d have to tilt the entire laptop base, which isn’t ideal. If you use a webcam all the time on your laptop, this one issue is likely a deal breaker, but on the other hand, by being able to tuck the webcam away, there’s definitely a privacy enhancement with this take. It’s a bit odd, but it all comes down to how much you rely on a webcam on your laptop on whether this is going to be an issue or not. 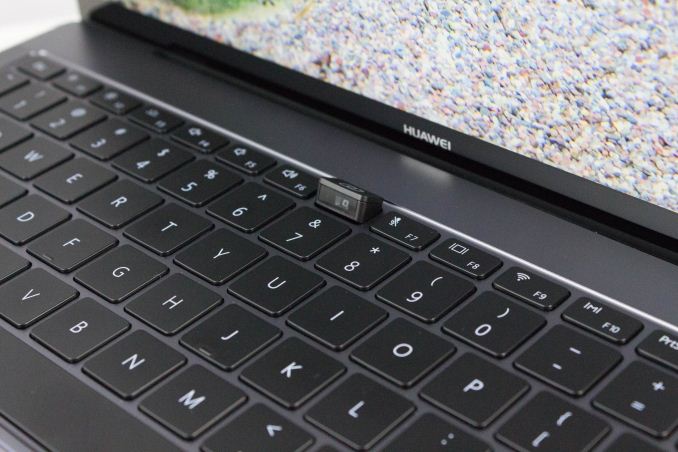 The rest of the design is a lot less compromising. The all-aluminum chassis is great to handle, and comes in two colors depending on the model. The Mystic Silver is offered on the Core i5 model, and the Core i7 version is outfitted in a Space Gray color. The laptop is also very thin, at just 14.6 mm, or 0.57-inches, and the laptop comes in under 3 lbs at 1.33 kg / 2.93 lbs. The laptop feels a lot smaller than you’d expect for a 13.9-inch laptop thanks to the small bezels and squarer aspect ratio. It’s hard to believe laptops used to come with such enormous bezels when you get to see these latest breeds in person.

The review unit has a bit of a creak on the bottom left side when picking it up, but speaking to others that have used or are using this notebook, that doesn’t seem to be a widespread issue luckily.

Opening the laptop, we can take a look at the keyboard and trackpad. Huawei has gone with a very standard keyboard layout, which is very welcome. There’s the usual compactness of certain keys like the arrow keys, but that’s to be expected when the entire design is in such a small space. It’s a full six-row keyboard though, and other than the webcam being on the top row, it’s all well thought out. 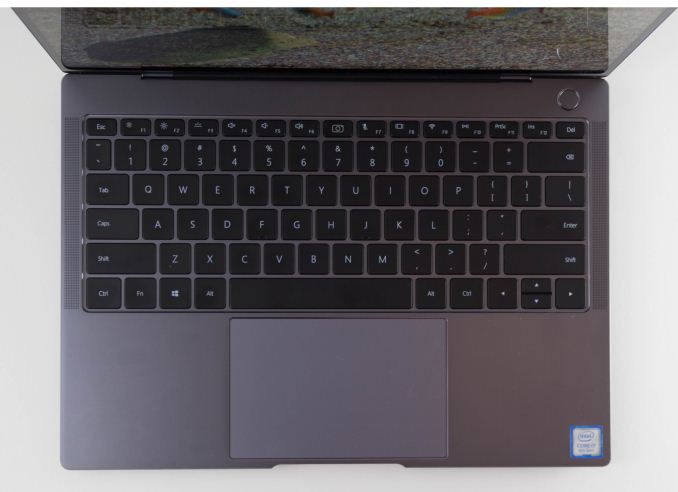 Using the keyboard is above average, despite there only being 1.1 mm of key travel on this notebook. There’s a good amount of resistance when pressing the keys, so they feel better than you’d think for such a short throw. Despite Huawei definitely taking inspiration from Apple on the design, they’ve kept the traditional key feel here. Some extra travel would likely improve the keyboard a bit, and some contour to the key caps might help as well, but the balance is still quite good.

The keys are of course backlit too, but there’s just two levels of backlighting, and even at the brightest, it could stand to be just a bit brighter. In addition, Huawei doesn’t light up the backlighting when you use the trackpad, so when using the laptop in a dim room, it can be a bit more challenging to get lined up with the keys when you want to type. Most laptops do turn on the backlighting when you move the cursor, and this one should as well. It’s a small issue, but one worth pointing out.

The trackpad is a master stroke though. It’s oversized, but without being in your way like some of the other large trackpads, and it works very well. The trackpad material is incredibly smooth, and very responsive. The Surface Book likely has the best trackpad on a PC, and Huawei has arguably matched it.

On the keyboard deck is also two of the four speakers that Huawei has fitted in, with the second pair on the bottom near the front, and, incorporated into the power button is a fingerprint sensor for Windows Hello login.

Huawei has done an amazing job with the design. The thin bezels, coupled with the taller display, make for an incredibly compact 14-inch laptop, and despite the larger display size, it’s still very thin, and very light. There’s enough connectivity to get you by while still being plugged in, which isn’t something that can be said about all thin and light notebooks. As long as you don’t mind the webcam placement, there’s little to be upset about by the design of this MateBook X Pro.