Our twin boards may not look the same, but underneath the paint job the boards functionally identical, sporting the same features on each from port type and count to the controllers driving them. The B360 Gaming Plus follows MSI's traditional gaming theme with a black PCB and red highlights around the board. The Arctic, on the other hand, uses a unique white PCB along with silver and black highlights around the board. It appears to me MSI simply wanted to give users a choice of looks with which to work with.

Outside of that, both boards use the same 7-phase power delivery for the CPU, one M.2 slot, two full-length PCIe slots with one reinforced, and five SATA ports. The back panel IO between them is also the same offering an assortment of video outputs (HDMI and DVI), USB Connectivity including USB 3.1 ports, Intel-based networking, as well as the audio stack - all the same between them. The only difference between them outside of the looks is the price with the Arctic coming in around $30 higher. 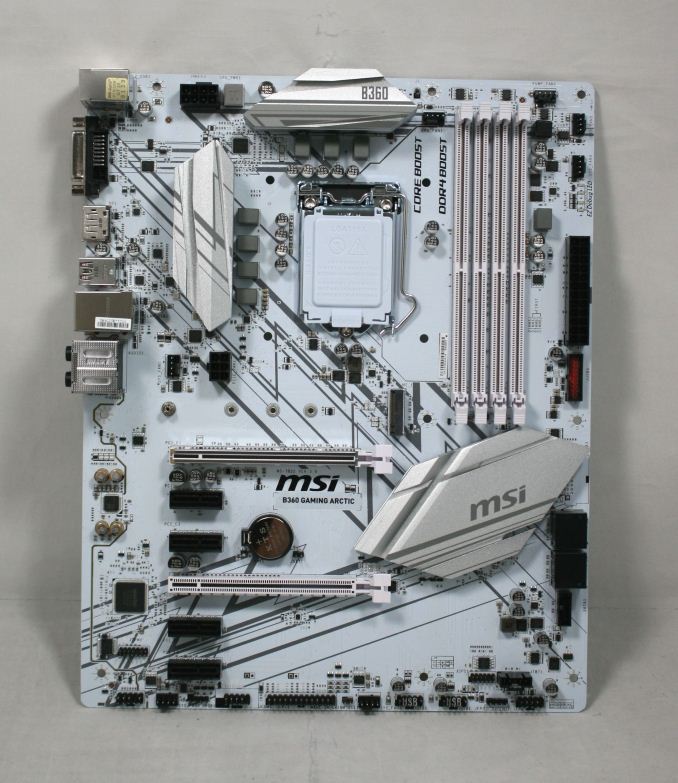 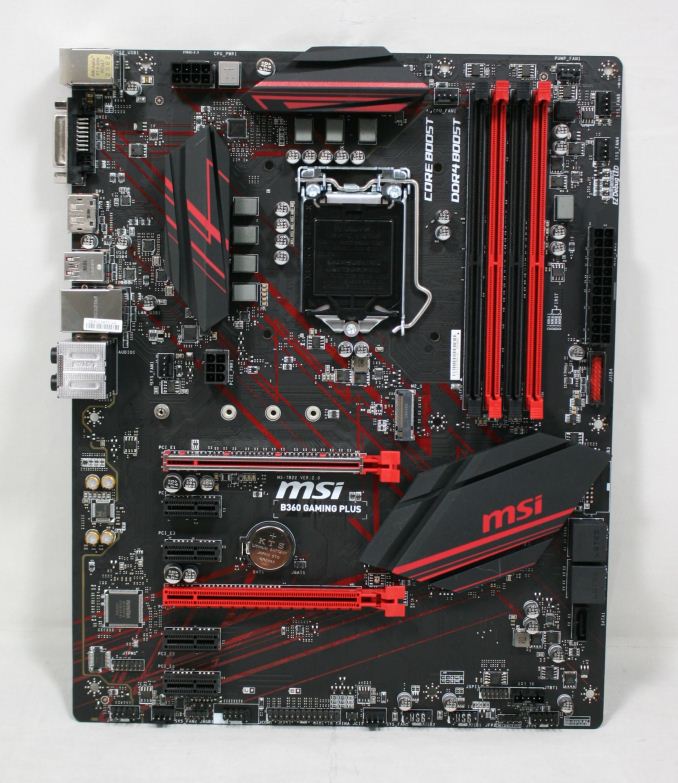 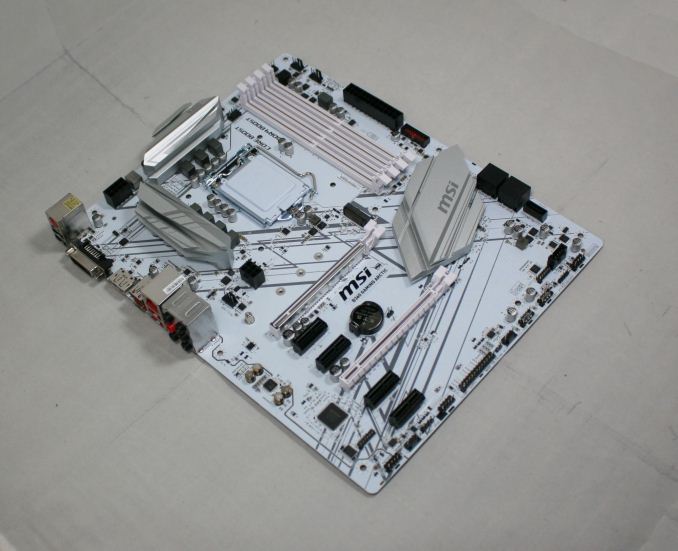 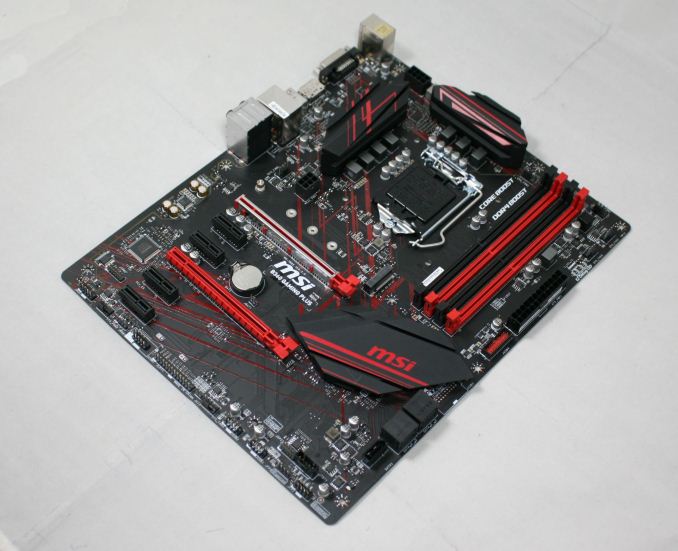 Both boards contain RGB LEDs which are located on the left-hand side of the board below the back panel IO area. The array of around 9 LEDs start from the audio stack and reach down to the bottom left corner of the board. On the top, the PCB has an audio separation line which is illuminated from the LEDs below. If the included lighting is not enough, there is a 4-pin RGB header on the bottom of the board where users are able to connect their own compatible lighting. All RGB LEDs are controlled through MSI's Mystic Light software.

The B360 Gaming Plus/Gaming Arctic have a total of seven fan headers around the board. In the upper right-hand corner by the DRAM slots are the first four consisting of a CPU fan header, two Sys fan headers, and a pump header.  On the left side of the board sitting just behind the rear panel audio stack is another Sys fan header with two more on the bottom of the board. All headers are able to work in both PWM or DC modes for fan control. 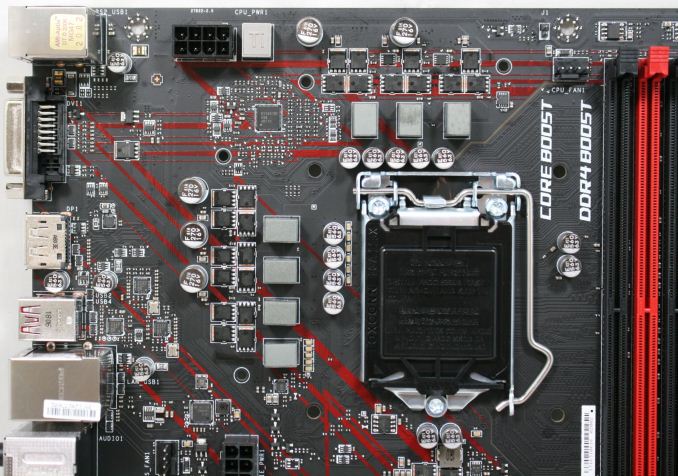 For power delivery, we know that B360 based motherboards are not able to overclock and stick to Intel specifications With this, their power bits do not have to be as robust as Z370 motherboards which has that flexibility. To that end, the MSI B360 Gaming Plus/Gaming Arctic comes with a seven-phase setup. It uses a Richtek RT3607BC 4+3 channel controller managing power sent to the Sinopower 4503NH MOSFETs. This setup did not have an issue handling the 95W i7-8700K processor used for the review.

The right edge of the board contains the five SATA ports with one (SATA_1) oriented vertically and the other four in a more familiar orientation. Sliding to the right is a front panel USB 3.0 header and the 24-pin ATX connector. Continuing on, next we can see the EZ Debug LED for easier troubleshooting on startup/POST as well as a couple of fan headers. 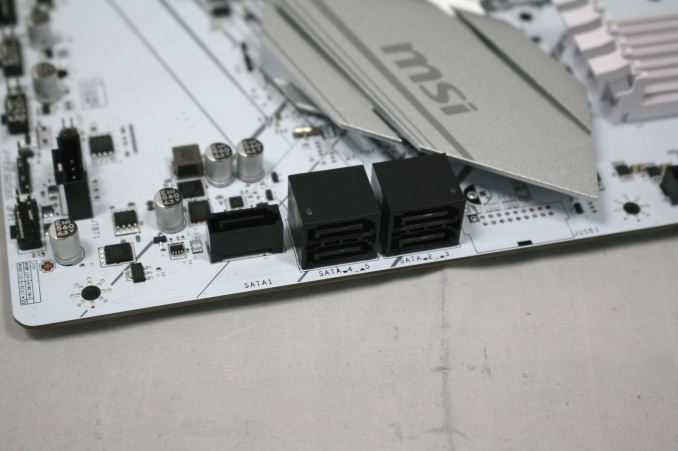 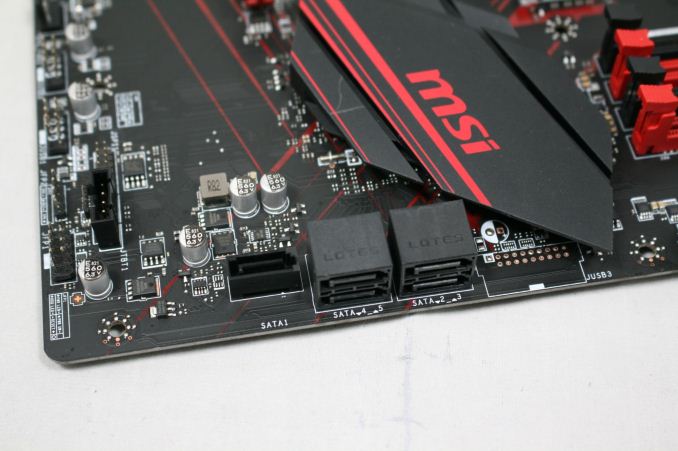 In the close-up view of the SATA ports, we are able to better see how these are oriented on the board. The single vertical SATA port, SATA_1, is also the port that disables when a M.2 SATA based SSD module is installed in the M.2 slot. The board supports RAID 0, 1, 5, and 10 on these ports. 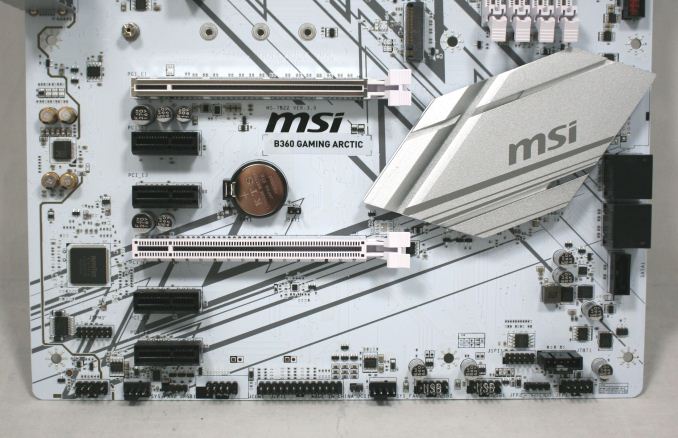 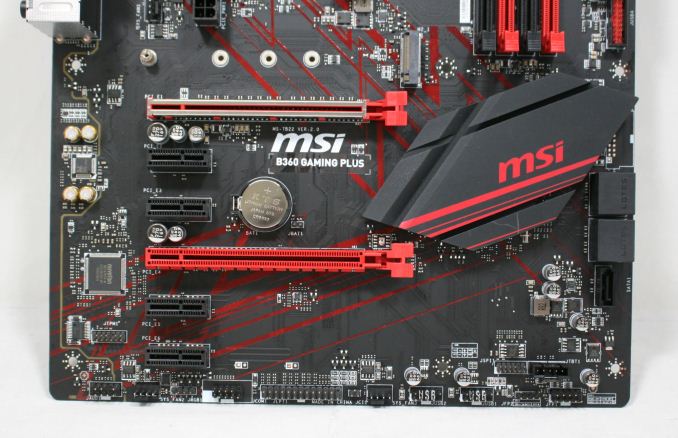 On the bottom half of the board on the far left side, we are able to see the unshielded Realtek ALC892 chip along with four Chemicon caps for the audio. We are also able to see the audio separation line as well. The board has two full-length PCIe slots with the top slot reinforced - what MSI calls Steel Armor PCIe slots. The top slot is wired directly to the CPU while the second slot is limited to x4 and fed from the PCH. This setup allows for AMD Crossfire but does not support NVIDIA SLI due to its x8 lane requirement. In addition to the full-length slots, the boards also has four x1 size slots fed from the PCH for other peripherals.

Across the bottom of the board are a lot of headers for various functionality. From left to right we are able to see the front panel audio, a system fan, RGB LED header, COM port, chassis intrusion header, another system fan, two USB 2.0 headers, front panel headers, and above them, a Thunderbolt AIC header. A typical assortment of connections.

Below is a quick reference table to show how the PCIe lanes are split out for various configurations. The "@" symbol is used to show slot preference for the configuration.

* Not CPU connected but used in Crossfire

The back panel IO has a full complement of ports from legacy PS2 up to the latest USB 3.1 Type-A and Type-C ports. The board also has a DVI-D and HDMI video outputs for use with the iGPU from the processor.

The accessory stack includes what is needed to get started, but almost literally nothing else. This type of accessory package is typical with budget boards. 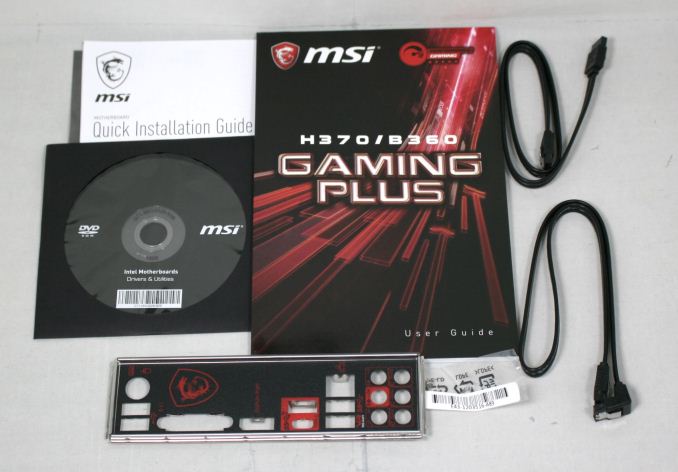