Going down to the silicon, the GeForce GTX 1050 3GB does indeed feature 3GB of VRAM, an extra GB over the original GTX 1050, which in turn only ever came in a 2GB version in the desktop space. But ultimately, the GTX 1050 3GB is another GPU configuration: the card has an extra enabled SM – now matching the GTX 1050 Ti at 6 SMs/768 CUDA cores – while also equipped with a cut-down 96-bit bus as opposed to the 128-bit bus of its other desktop GTX 1050 series siblings. In actual memory bandwidth numbers, this translates to 84 GB/s as opposed to 112 GB/s.

Otherwise, the raster engine and TMU counts are presumably identical to the GTX 1050 Ti, as the SM count requires the frontend to be a fully enabled GP107 part. As for clockspeeds, the GTX 1050 3GB features faster base and boost than both GTX 1050 Ti and GTX 1050 2GB.

Things get a bit trickier on the backend though. While NVIDIA's published specifications don't offer clarity on this, the company's designs normally have a 1:1 ratio between ROP partitions and memory controllers. Meaning that as this configuration has a 96-bit memory bus – and thus only 3 out of 4 memory controllers are enabled – then it has almost certainly lost a ROP partition as well. This also means that a quarter of the GPU's L2 cache (256KB) has also been shut off, leaving the chip with just 768KB of L2.

This is a prime example of why unusual memory configurations are more important than they may seem at first, as several parts of the GPU are strongly bound to the size of the memory bus. It also means that estimating the card's performance based on just clockspeeds and functional block counts is harder than it may seem, as now one needs to take into account memory bandwidth, ROP throughput, and cache hits. 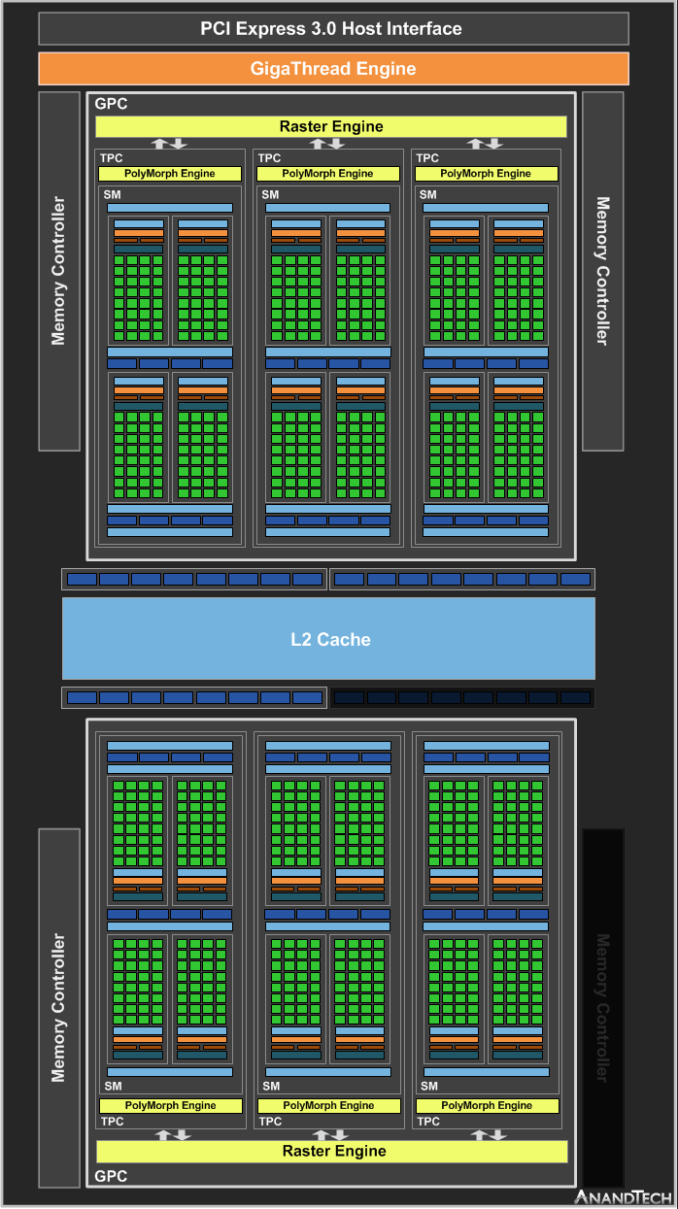 All told, the existence of this card is not entirely unexpected, but it is odd. That NVIDIA is going with a 3 memory channel configuration stongly implies that the company has built up a stockpile of GP107 parts with one bad ROP/L2/MC partition, which is not unusual but GP107 is also a small enough die that the need to salvage to this level isn't quite as great. Otherwise, NVIDIA could have produced a 3GB card with a 128-bit memory bus and unbalanced memory configuration (2x1GB + 2x0.5GB), which brings its own tradeoffs but is generally the more straightforward option. At any rate, it's rare to see a salvage part like this enter the retail market this late in the cycle.

In total, NVIDIA cited the performance difference to PCWorld as averaging out to around 10% uplift of the GTX 1050 3GB over the 2GB. And so once again, we are now looking at multiple GPU configurations being sold at retail under a GTX 10x0 banner.

Contextually speaking, this new SKU comes in at a time of cryptocurrency mining demand, which has inflated prices and reduced availabilities for video cards all around. In that sense, where there may not have been room for an in-between GTX 1050 SKU, there is now. Or given diminishing cryptodemand, silicon that could be re-configured for consumer GeForce use. And in terms of competition, the GTX 1050 series match up with the AMD Radeon RX 560 (16 and 14 CU variants), a nominally single SKU which amusingly has had its own share of naming troubles. Lastly, recent NVIDIA GeForce launch cadence would suggest that the post GeForce GTX 10-series are on the horizon, a situation where Pascal-based lower-end product launches are easily compatible with.

And for NVIDIA’s part, a quick look at their own Linux driver documentation of supported GPUs by PCI ID shows the amount of variants and configurations for GP107 and GP106, with some device IDs implying GP104-based GTX 1060 cards. Though not all of the PCI IDs may reflect a currently-selling product, some might be regional or simply unpublicized; for the rumored GTX 1060 5GB, it had already found itself on NVIDIA’s driver support lists earlier this year. So the appearance of another configuration isn’t necessarily out of the blue. For the GTX 1050 3GB today, it may not be based on GP107, and given that most manufacturers rarely, if ever, comment on the lowest performing parts in their stack, future clarification is unlikely.

But while strange GPU configurations at the lower-half of performance brackets are not uncommon, as is the dearth of clear specification documentation, the obfuscating nomenclature is less palatable. As mentioned at the time of the GTX 1060 3GB launch, NVIDIA hadn’t had multiple GPU configurations selling under a single retail GTX model number for some years now, but now they’ve done it again – excluding the recent naming shenanigans with entry-level GT 1030 GDDR5/DDR4 as well as the MX150 variants. Keeping the different GPU configurations separate to the memory configuration like with the GTX 1060 is still unintuitive or misleading for most consumers, who may not research entry-level components or be unaware of how GPUs are configured. It appears that NVIDIA has no intention of changing from its ongoing nomenclature philosophy.

Going forward, however, this approach hardly educates the consumer. For one, all previous references to the “GTX 1050” would need to be updated; on the GTX 1050 Family page, the performance graphs still refer to the “GTX 1050,” something that undiscerning readers would not pick up on.

As noted to PCWorld in response to availability and pricing, the GeForce GTX 1050 3GB will be in the same price bracket as the GTX 1050 Ti and GTX 1050 2GB.