With a price per GB a little over twice that of the the fastest flash-based consumer SSDs, the Optane SSD 900P is an exclusive high-end product. For most desktop usage, drives like the 960 PRO are already fast enough to make storage no longer a severe bottleneck. The most noticeable delays due to storage performance on a 960 PRO are when moving around large files, and the Optane SSD doesn't offer any significant improvement to sequential transfer speeds. Random writes can be a challenge for flash-based SSDs, but volatile write caches and SLC caches allow them to handle short bursts with very high performance.

The unprecedented random read performance of the Optane SSD 900P is its biggest strength on paper, but not one that will often lead to a proportional speedup in overall application performance. Too many programs and filesystems are still designed with mechanical hard drive performance in mind as the baseline, and further increases to SSD performance serve mainly to shift the bottlenecks further onto the CPU, RAM, network, and even the user's own reaction time.

The scenarios where a drive like the Optane SSD 900P can offer meaningful and worthwhile performance improvements can be broadly categorized as as situations where the Optane SSD can help with one of two problems:

1. Storage is too slow

About the only time a desktop could challenge the sequential access performance of a high-end PCIe SSD (based on flash or 3D XPoint) is when dealing with high resolution uncompressed video. The Optane SSD doesn't help much here because of its limited capacity, and the PCIe 3 x4 link itself is a bottleneck at the highest refresh rates and bit depths. For video work, flash-based SSDs are definitely a better choice, and RAID arrays of cheaper SATA SSDs may be a better option than PCIe SSDs. Desktop workloads that require extremely high sustained random write performance are very rare, and SLC caching on a flash-based SSD nicely takes care of most realistic quantities of random writes.

That said, there are some situations where higher random read performance can be quite noticeable. Searching through a large volume of data is a common case, such as searching through a video, but it usually presents enough opportunities for parallelization that the drive's queue depth will climb up to the range where flash-based SSDs come close to the Optane SSD. Game level load times can in theory benefit greatly from faster read speeds, but in practice decompressing the assets after loading them into RAM quickly becomes the bottleneck. Most of the other situations where the performance advantage of the Optane SSD will really help are better described as a different kind of problem:

In the workstation market, there are abundant examples of compute tasks with a memory working set that doesn't fit in RAM. Almost any simulation or rendering task will have a parameter for mesh density or particle count that can very quickly scale the memory requirements from a few GB to tens or hundreds of GB. An Optane SSD is far slower than four to eight channels of DDR4, but 16GB DIMMs are least 6-7 times more expensive per GB than the Optane SSD 900P, and putting more than 128GB of DRAM in an ATX motherboard is even more expensive.

Intel PR provided an example of using SideFX Houdini to render a high-resolution animation that included a 1.1 billion particle water simulation. Their test used a machine with a 10-core CPU and 64GB of RAM, and compared the 512GB Samsung 960 PRO against the 480GB Optane SSD 900P. The total memory requirements (DRAM+swap) of the rendering job were not disclosed, but the resulting 2.7x speedup is very plausible for a task that absolutely hammers the swap device. With a sufficiently high thread count to keep the queue depth high, that margin could be narrower (especially with the fastest 2TB 960 PRO), but then context switch overhead would become problematic. With the Optane SSD 900P, the random read latency is low enough that it would be hard to host more than two swap-limited threads per core without context switch overhead wasting more time than waiting on the SSD.

Even though gaming isn't the ideal workload for the Optane SSD 900P to show off its performance, Intel is marketing the 900P to gaming enthusiasts. They're bundling a code for the game Star Citizen with the 900P, and including a new in-game spaceship variant as an exclusive item for Optane SSD customers. Intel has partnered with Star Citizen developer Roberts Space Industries (RSI) to hold a launch event for the 900P at CitizenCon 2017 today, which they are streaming live on Twitch and YouTube. Attendees will have the chance to playtest the Intel-exclusive Sabre Raven ship, but it is still undergoing final QA and will not be immediately available to Optane SSD 900P customers. The web page for redeeming the Star Citizen game code had not gone live as of the time of writing, so I was unable to attempt any testing with the game. (ed: I remember when AMD was offering a Star Citizen bundle in 2014 as well. The game still hasn't shipped.)

At the media briefing for the 900P, an RSI representative said they are exploring ways to optimize the Star Citizen experience on Optane SSDs, but not many specifics were provided. One approach under consideration is using less compression for some game assets, freeing up CPU time but relying on high storage performance. It didn't sound like this work was close to release. In the game's current state, RSI claims they've seen load times improve by 20-25%, but they didn't specify what other storage device they were comparing against. 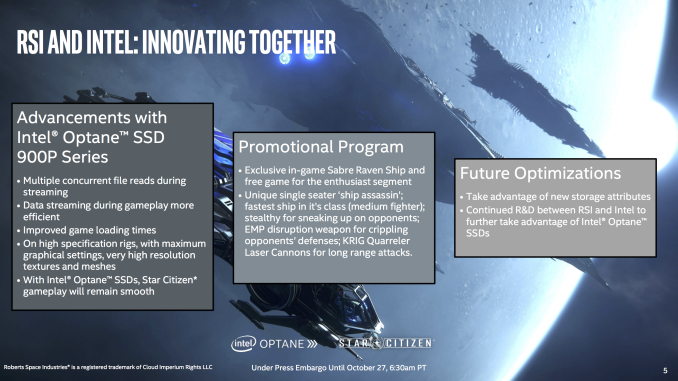