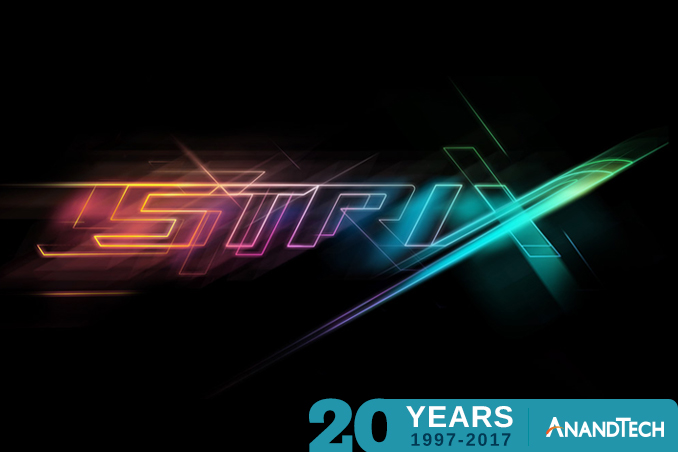 Taking the wheel for our afternoon giveaway in our 20 day giveaway celebration of AnandTech’s 20th anniversary is ASUS. The Taiwanese technology titan has their fingers in a number of different product categories, so it’s only appropriate that they’ve sent us a technology sampler of sorts with products from three of their major categories: video cards, networking gear, and of course, motherboards. All told we have AMD and NVIDIA video cards, AMD and Intel motherboards, a router, and a WiFi adapter to give away this afternoon. So we have a number of prizes to give away to our lucky winners. 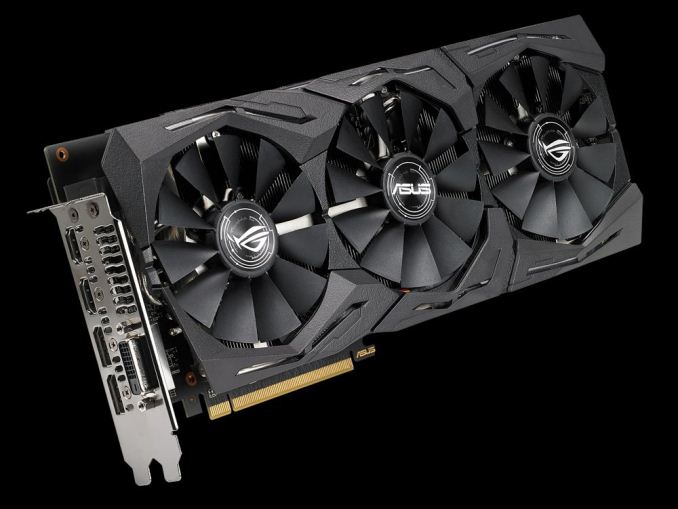 ASUS classifies this as a 2.5 slot card, and between that and the 11.73” length, this is a sizable beast of a card. Putting that space to good use, the card is equipped with a trio of the company’s “wing-blade” fans, which also support zero fan speed idling. Meanwhile as you’d expect for a high-end video card, this is built on a custom ASUS PCB, equipped with a 7+1 phase power delivery system built from ASUS’s Super Alloy Power II components. Rounding out the package is a full RGB lighting system built into the shroud, courtesy of ASUS’s Aura Sync lighting technology. 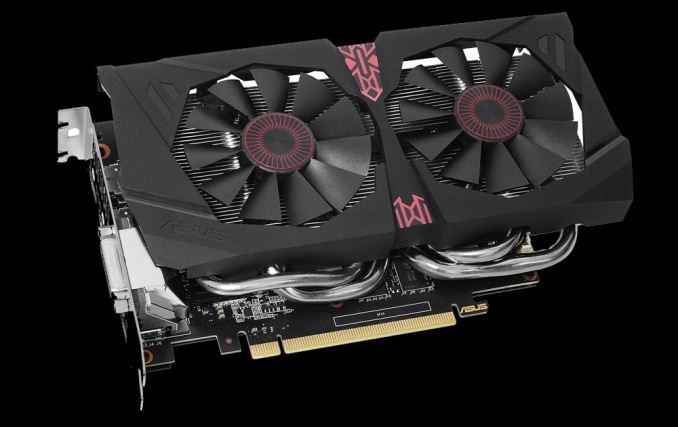 Our second video card from ASUS’s collection is their GeForce GTX 1060 OC Edition. While not a high-end card like the ROG Strix, the GeForce card features its own set of tricks. In particular, this factory overclocked card is one of the first GTX 1060 cards on the market to feature 9Gbps GDDR5 memory, which NVIDIA only recently started offering on factory OC cards. Coupled with that is 100MHz GPU frequency bump, making for a sizable boost over the reference GTX 1060.

ASUS’s GTX 1060 is equipped with their DirectCU II cooler – a dual fan open air cooler – which like its ROG counterpart, also implements their “wing-blade” fans and zero fan speed idling. The card’s PCB is also equipped with ASUS’s Super Alloy Power II components to further set it apart from other cards. 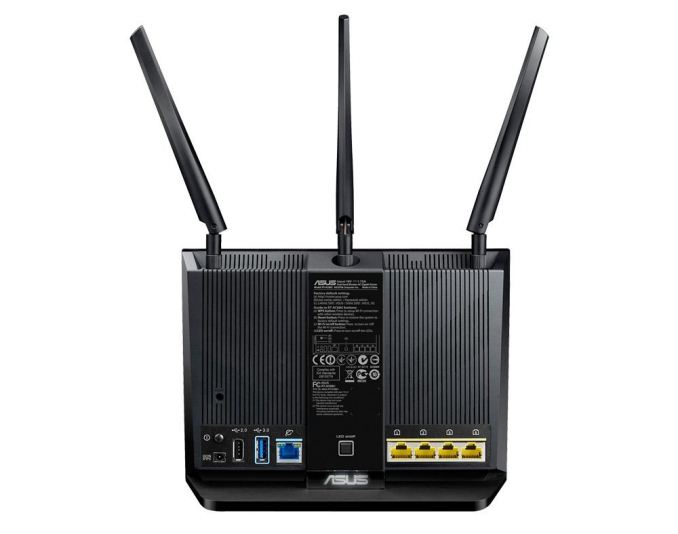 Third up is one of ASUS’s routers, the RT-AC1900P. This is a dual-band, 3 antenna router supporting 3x3 MIMO on both the 2.4GHz and 5GHz bands. With the addition of support for Broadcom’s proprietary TurboQAM feature, this means the router can hit 600Mbps on 2.4GHz and 1300Mbps on 5GHz.

In terms of wired connectivity, the RT-1900 features a quarter of GigE ports, along with another GigE uplink port. A USB 3.0 port and a USB 2.0 port are provided to take advantage of the router’s significant OS capabilities, including network share hosting, cellular modem connectivity, and network printer hosting. Internally, the router is powered by a dual-core 1.4GHz processor, though ASUS doesn’t specify the exact make. 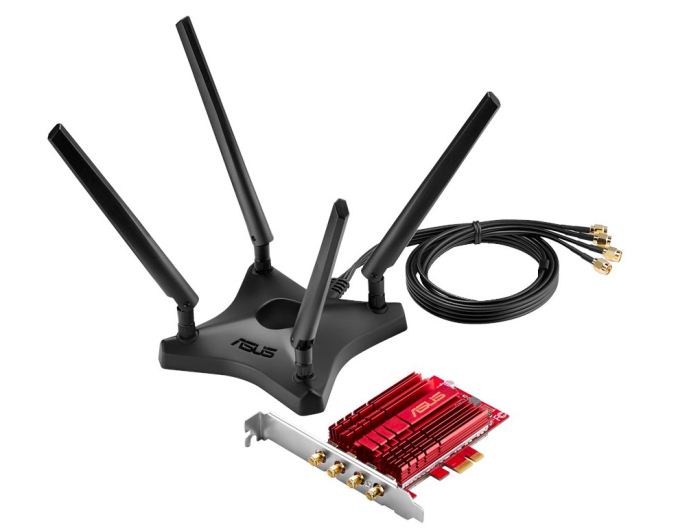 Meanwhile if you need wireless connectivity on the client side of matters, ASUS has also sent over one of their PCE-AC88 WiFi adapters. This PCIe card based adapter offers 4x4 MIMO streams and the latest-generation MCS-11 (1024-QAM) modulation modes, allowing it to transfer up to 2167Mbps on the 5GHz band. The adapter also uses an external antenna pod with adjustable antennas, to allow for the best antenna positioning. 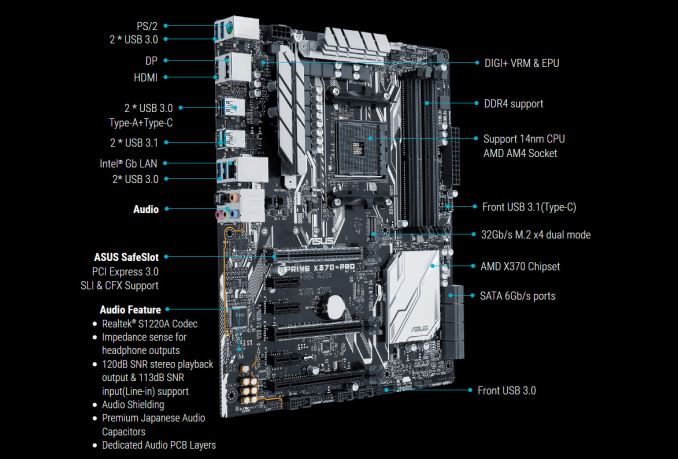 And as this is a Prime board, ASUS hasn’t skimped on the features either. The board features ASUS’s “5X” hardware protection, including their reinforced “SafeSlot” PCIe slots. And on the BIOS side the board features their usual high-end BIOS features – including one-click overclocking and CrashFree BIOS 3. 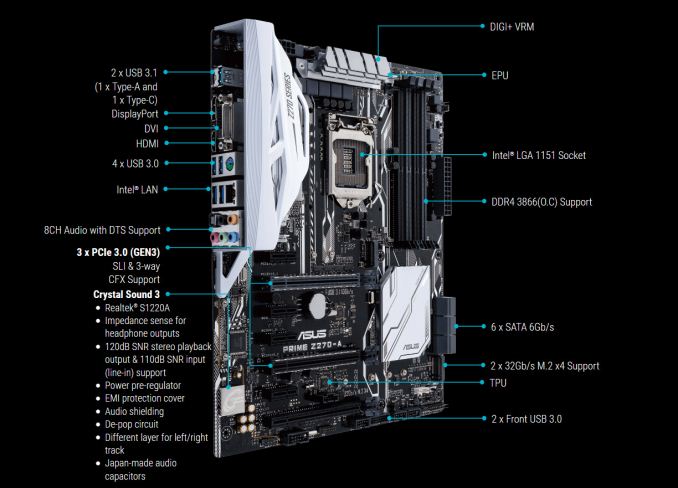 Last but certainly not least, we have ASUS’s Intel motherboard, the Prime Z270-A. This full ATX LGA 1151 board offers 3 PCIe x16 slots and another 4 PCIe x1 slots. The board also features a pair of M.2 slots – one pure PCIe and the other offering both SATA and PCIe. ASUS has also added several third-party controllers to the board, including an ASMedia USB 3.1 (Gen 2) controller, an Intel I219V controller for GigE networking, and a Realtek ALC S1220A for audio.

Otherwise like its AMD counterpart, ASUS has similarly equipped it in terms of features, including the 5X hardware protection and high-end BIOS features. The board also features a dedicated clock generator (which ASUS dubs Pro Clock) for improved overclocking, and the company is even embracing customization via 3D Printing, publishing the blueprints for a few accessories that can be printed for the board.

Finally, as with our other giveaways, this afternoon’s giveaway is only open for 48 hours, so be sure to enter soon. However please note that for legal reasons, we’re only able to open these giveaways to residents of the United States.

Good luck to everyone! And be sure to check in tomorrow for our next giveaway.