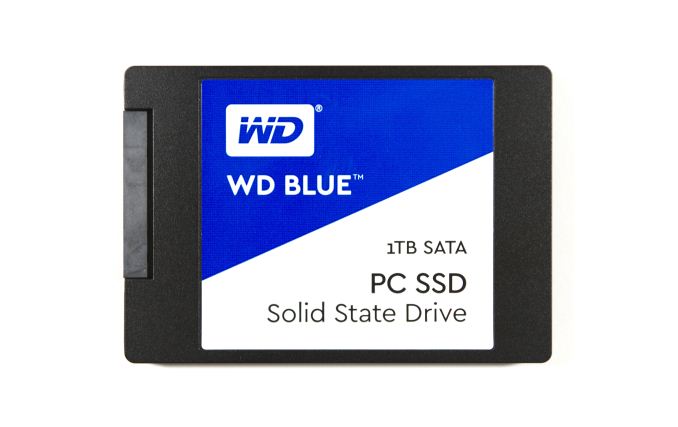 Five months after completing its acquisition of SanDisk, Western Digital is introducing SSDs under the WD brand for the consumer market. The WD Blue is the mainstream SATA offering and is derived from the SanDisk X400. While not exactly the first Western Digital SSD in blue, the WD Blue is the beginning of a new era for the WD brand and is an acknowledgment that SSDs are now mainstream consumer products that exist alongside or displace hard drives instead of just occupying a high-end niche.

The SanDisk X400 was announced at the beginning of this year as the new flagship of SanDisk's business/OEM client SSD family. When we reviewed it in May we were pleasantly surprised to find that it raised the bar for the performance and power efficiency of planar TLC SSDs and was a credible mid-range drive, not just an entry-level budget-oriented product. The WD Blue SSD uses the same hardware platform as the SanDisk X400, but with some changes to the firmware. Most notably, the WD Blue reserves a bit more spare area and thus has capacities of 250GB, 500GB and 1000GB where the X400 has capacities of 128GB–1024GB. There are minor differences to the performance specifications and the WD Blue has only a three year warranty compared to the X400's five years. (Though still better than the two year warranty carried by the current WD Blue hard drives.)

All capacities of the WD Blue are available in either the 2.5" SATA form factor or as M.2 2280 cards. This continues the trend of recent mainstream SATA SSDs placing M.2 on an equal footing with the 2.5" form factor.

As a result of the increased spare area, the WD Blue has a higher write endurance rating than the SanDisk X400 and one of the highest endurance ratings of any TLC SSD. It even exceeds the rating on some capacities of the Samsung 850 Pro that comes with a 10 year warranty. Western Digital is pitching the WD Blue as suitable for heavy workloads, and even if its performance falls short of the best SATA drives it should last a very long time even when subject to a write-intensive workload.

The construction of the WD Blue carries over the same metal case and plastic lid that SanDisk has been using for years. Inside our 1TB sample we find the same single-sided PCB as in the X400 and the thermal pad that covers nearly every component. The NAND is arranged in eight packages of 128GB each, while the Micron DRAM is split across two packages. 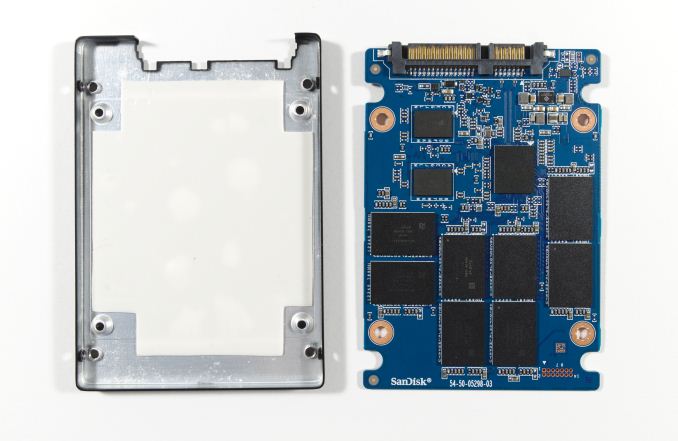 For this review the 1TB WD Blue will be compared against most of the other 1TB-class SATA drives we have tested. The current competition in the marketplace consists primarily of the preceding SanDisk X400, cheaper planar TLC SSDs such as the OCZ Trion 150, MLC SSDs that are mostly significantly more expensive, and 3D TLC SSDs such as the Samsung 850 EVO and Crucial MX300. Note that while we have already reviewed the 750GB Crucial MX300, in this review we are comparing against the 1050GB MX300 that will be covered by an upcoming review of the wider range of MX300 capacities that are now available.