For our first fan review we want to talk about the performance of fans and discuss how we will be testing them in our upcoming articles. This will serve as both a reference point for readers and manufacturers, as well as a chance to receive feedback and input on what we're doing before our first roundups start coming out. A large percentage of computer users are unconcerned with the actual performance of any given fan; most base their choices on recommendations and are swayed by marketing claims of "noiseless operation" and "astounding performance". Advanced users and enthusiasts are using up a lot of grey matter on the topic, seeking to find the best possible solution over dozens of possible choices. Regrettably, even if the user possesses the will and the knowledge to select a product suitable for his/her needs, they are often limited to the manufacturer's specifications, which usually are vague at best.

To measure the actual performance of a fan, the user has to know the P-Q (pressure to volume) chart of the fan. Here we measure the amount of applied pressure restriction, measured in mmH2O (where 1 mm H2O is the equivalent of 9.81 Pascals - one Pascal is the pressure required to accelerate 1 kg of mass at a speed of 1 meters per second squared per square meter) required to give a specific volume flow (measured in cubic feet per minute or CFM). The more the flow is restricted, the less volume flow is generated and the higher the pressure of the fan is. Still, some of the computer users who actually know how to interpret a P-Q chart are frequently misconceived that a P-Q chart is depicted by a straight line, such as this: 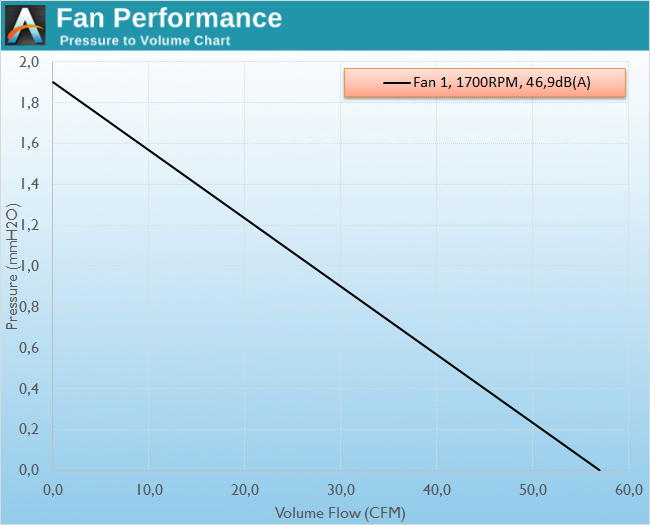 Unfortunately, this could not be further from the truth. The shape of the curve varies between the maximum static pressure and maximum volume flow rating, depending on several dozens of factors, mainly having to do with the design of the blades and the torque (the pushing power) of the engine. As such, two near-identical fans can have completely different behavior, which can be muddied by the actual 'naming' of the fan as an added element of confusion.

For example, the following chart depicts the P-Q chart of two fans. The first fan has a higher static pressure rating than the second and they both have an equal maximum volume flow (on paper), yet the second fan is a better selection for use as a case fan as it performs better when there are few obstructions. 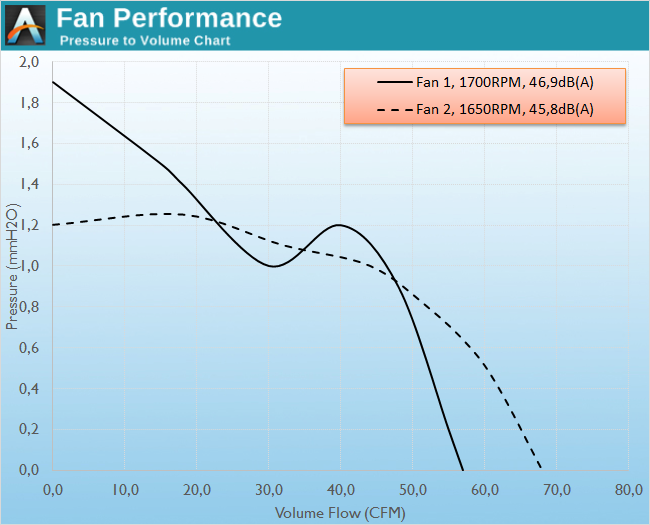 Unfortunately, the calculation of the impedance (resistance to move air) the fan will face by a grill/cooler/radiator/filter can be very difficult to assess without specialized equipment. It can be measured but it depends on far too many variables, including several environmental figures, such as the temperature and the air density. Even if we did extract a specific graph for every single part, the actual graph would be different for every single user. Therefore, it is not practical to give a graph depicting the exact impedance that an item has. It is however possible to provide an usable estimate, which we will be doing so in our future cooler and radiator reviews. The impedance of different items that can restrict the airflow looks like this: 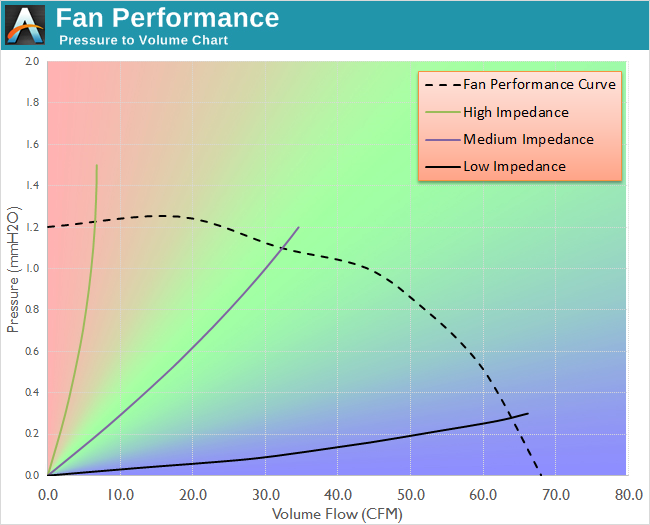 Where the impedance line intersects with the fan's performance curve, that's where the fan will operate.
So a low impedance item generates 0.3 mm H2O of pressure and hits the fan curve at ~63 CFM in this case.

The green line depicts a high impedance item, such as a very dense liquid cooling radiator. The purple line is for a medium impedance item, such as a cooler. The black line is for a low impedance application, such as a case fan with a simple finger guard or a clean filter. For example, the medium impedance item in the graph above would have the fan moving about 32 CFM. There are no actual conditions under which the actual performance of a fan will go very near its maximum static pressure point nor will a fan will reach its maximum volume flow. This allows us to provide a usable estimate when testing coolers, radiators and similar devices. For example, a "very high impedance" radiator would lean towards the left side of the red area, while a "medium to low impendance" cooler would lean towards the right side of the green area. 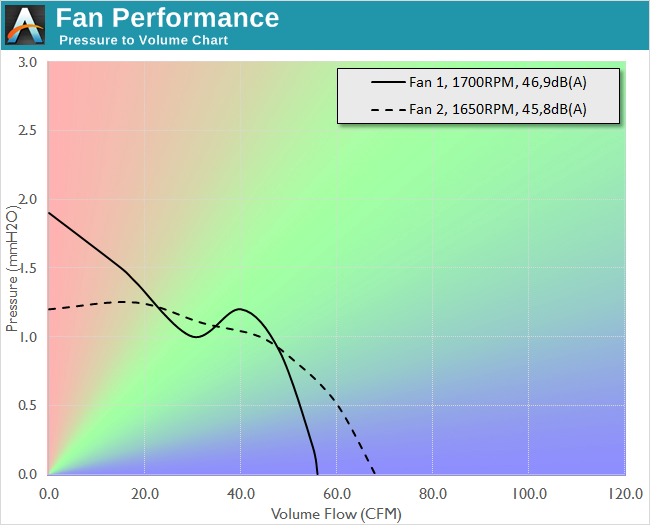 We will be using the above style of graph for the delivery of our results, maintaining the same axes for 120mm/140mm fans for easy comparisons. The red, green and blue areas should be consulted for high, medium and low impedance applications respectively. Even if the axes do shorten, note that the areas remain nearly identical if the range of both axes is reduced by the same percentage.

When the expected obstruction is high, some manufacturers use two fans in series (a push-pull configuration). This is often the case with liquid-cooling radiators. When two fans are placed in series, their pressure at a given airflow is increased (but not doubled) and thus the airflow at a given pressure point is increased, as seen in the following example. 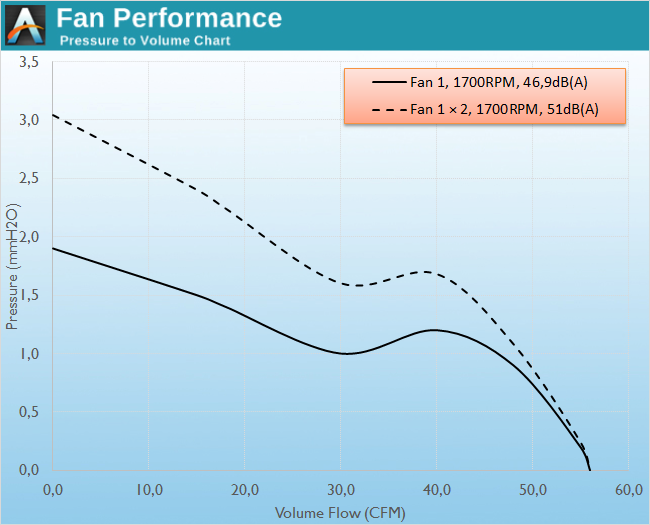 Thus at a static pressure of 1.5 mmH2O (medium impedance device, such as an air cooler), volume flow increases here from 15 CFM to 43 CFM. However, their maximum airflow will always be the same; therefore, this approach makes no sense when the impedance is low and only in high static pressure situations.

How AnandTech Will Test Fans

We will begin testing fans using an Extech HD350 differential manometer with a Pitot tube, an Extech AN200 velocity meter, and a custom apparatus designed for this specific purpose. The apparatus has a mechanism that allows us to test the unobstructed (maximum) volume flow of a fan, the fully obstructed (maximum static) pressure of the fan, and multiple points in between, allowing us to compose the actual P-Q performance chart of any fan. However, we are measuring the actual airflow generated by the fan, not that calculated by our maximum recorded air velocity.

For noise measurements, we are using an Extech HD600 high sensitivity SPL meter. The noise of the fan is measured from 15 centimeters away, not one meter as IEC certifications require, as that would be far too great a distance to measure differences between nearly silent products. Note however that we are measuring the noise level of a fan with its flow unobstructed. The addition of far grills, the installation on a cooler, and any other form of obstruction will increase the generated noise, as aerodynamic noise will be added into the environment.

We also plan on testing fans at their "stock" 12 V PC voltage and at a lower voltage, which will most usually be 7 V. This may not always be practical on some fans (i.e. very low speed fans may have their performance degraded far too much), but when it is we will do so. While it's impossible to state how any fan will perform in every situation, we will be able to provide at least a more rigorous view of each fan's performance. In the meantime, any feedback on our approach to testing or requests for additional tests is welcome.