As previously discussed, on the GPU Samsung has added two additional shader cores to the Mali T760 for additional performance in addition to a clock speed bump from 700 to 772 MHz maximum. To evaluate the effects of this we look at GFXBench which is generally accepted as a pure GPU benchmark. 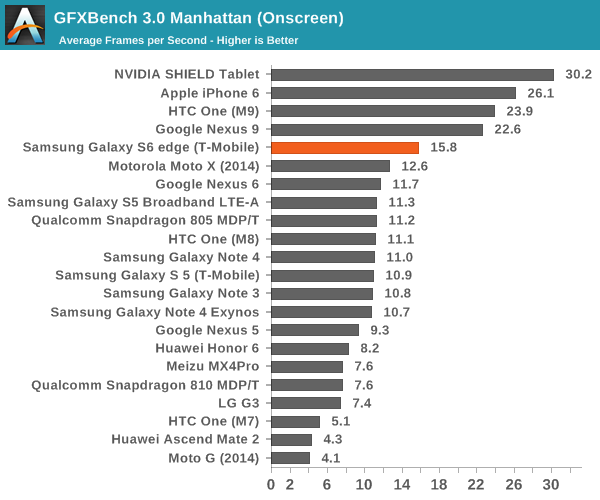 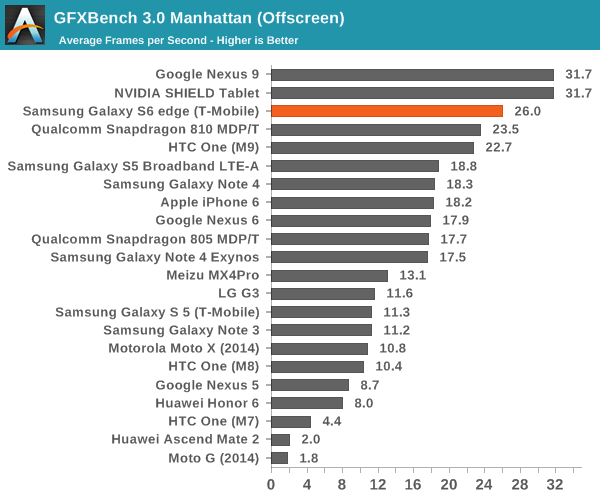 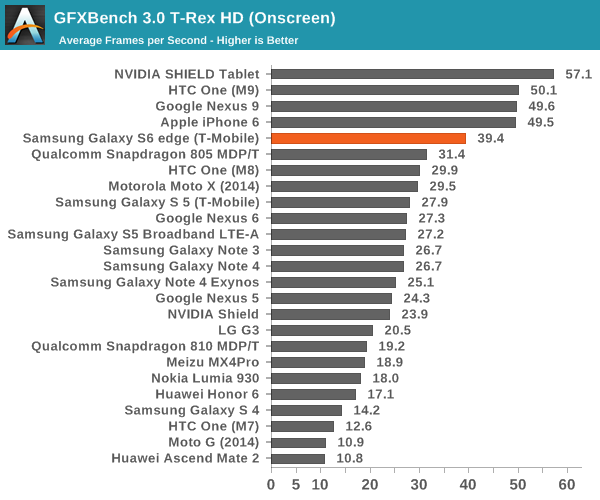 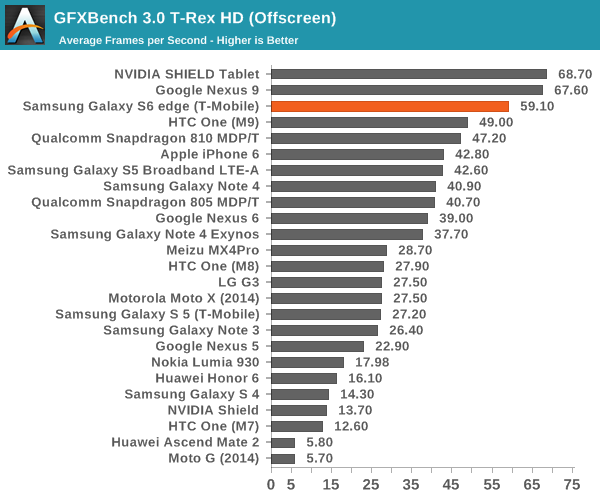 From the results the Mali T760MP8 GPU of the Exynos 7420 performs admirably in comparison to the Adreno 430 of the Snapdragon 810. We see a 10% lead over the Adreno 430 in Manhattan, growing to 20% in T-Rex. Qualcomm hinted that the Adreno 430 is more strongly improved in ALU performance over the Adreno 420, which would explain why the gap isn't as significant this generation. A 700 MHz clock on the Adreno 430 would likely equal to T760 in this case, but I suspect the power consumption of such a clock would be untenable. The Galaxy S6 does fall behind on the on-screen benchmarks due to the 1440p display compared to the 1080p display of the One M9, but rendering at a lower resolution would avoid most of these problems in real games.

As previously discussed, the Galaxy S6 line introduces a newer generation of AMOLED displays, which is said to increase maximum luminance to 600 nits. Samsung claims that this was achieved with the use of new materials, which is likely necessary in order to sustain power efficiency improvements. It doesn't seem that AMOLED is uniquely suited to high resolution, but rather that Samsung Display Corp. is managing to dramatically improve how they make AMOLED displays with every year that offset power consumption increases from higher resolution displays. To find out how Samsung did, we use SpectraCal's CalMAN 5 Ultimate, in addition to X-Rite's i1Pro2 Basic to characterize displays as accurately as possible. 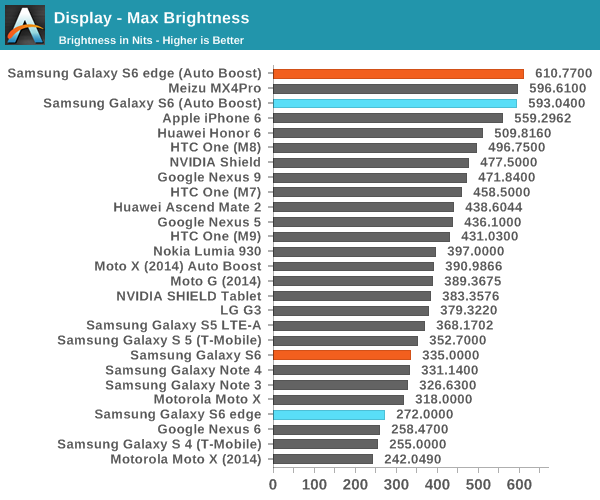 From the results Samsung's claims of a 600 nit display are valid in this case, which is a 100% APL white display. It's important to note that achieving this requires the use of auto-brightness, and that manual brightness is limited to a much lower brightness to reduce power usage, here the S6 sees similar maximum brightness as the S5. The S6 edge disappointingly only achieves 272 nits in this mode, a rather low value. I saw color balance shift dramatically in auto-boost mode, which suggests that this operating mode is likely less efficient than manual brightness. As an explanation, we've seen that colors are controlled in AMOLED by voltage while brightness is controlled by PWM (pulse width modulation). As with most recent AMOLED displays, there's no DC bias to the pixels so the contrast really is infinite instead of just a very large number when displaying black. 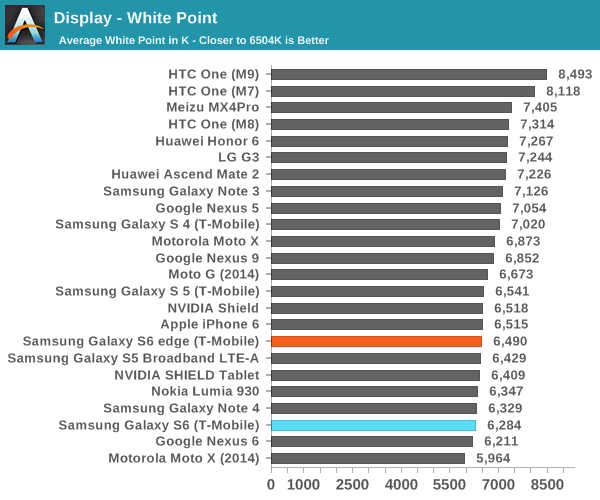 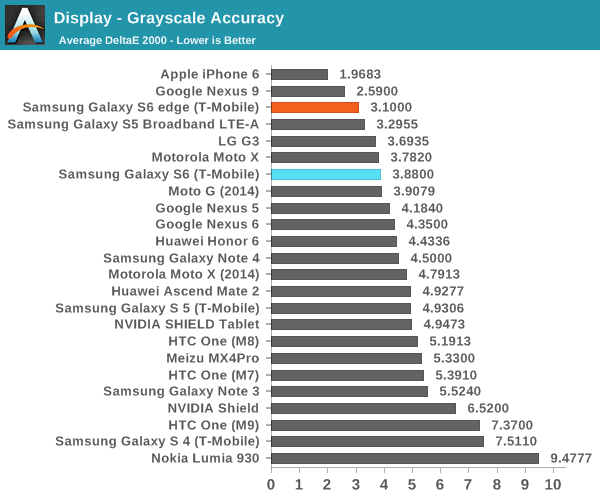 Moving on to grayscale, we can see that Samsung has done a pretty good job of controlling the white point and gamma across the saturation sweep, even if green is slightly dominant in both displays. We can also see that there is variation across displays as the S6 edge is closer to neutral while the S6 sample tends a bit warmer. 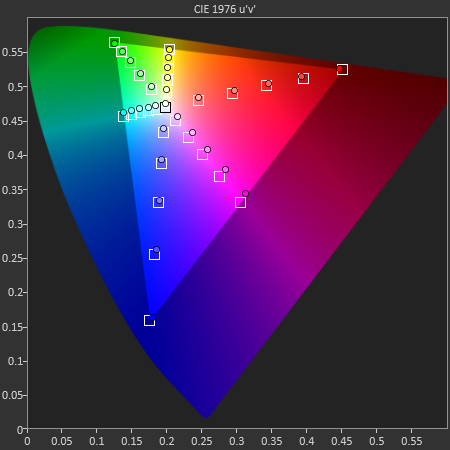 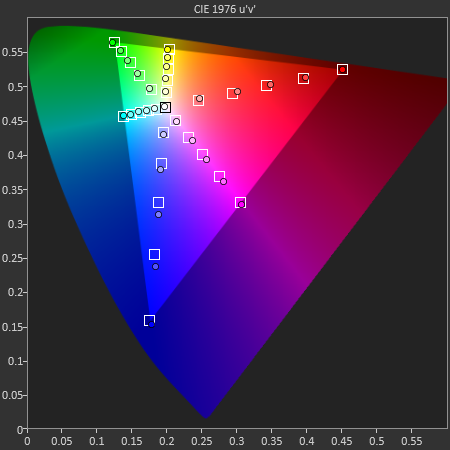 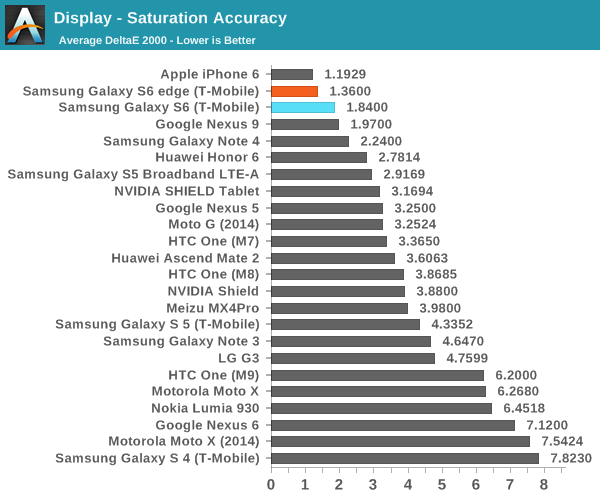 In the saturation sweep, both displays do an incredible job. I really don't have anything else to say here, because there's really no way to improve on the level of calibration Samsung has done on this display. Unless Samsung calibrates every single display in production, which is wildly impractical and effectively impossible to do, this is as good as it gets for a mass-produced device. Improving past this point will also be incredibly difficult to perceive, which means there's no real reason to go any further. 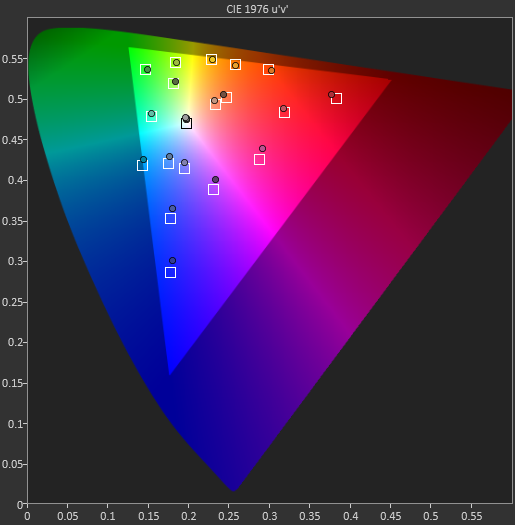 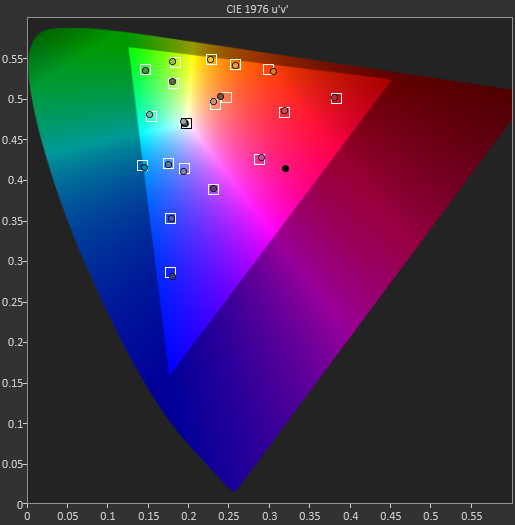 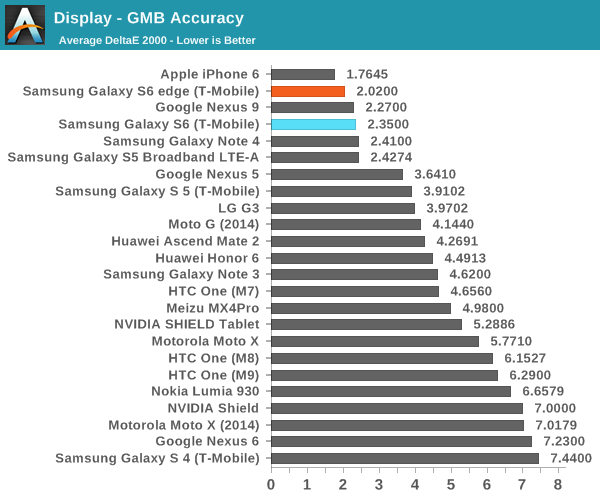 In the Gretag MacBeth ColorChecker, we can get an idea for overall color accuracy, which paints a picture similar to the saturation test. The only real problem I've noticed with these displays are the viewing angles, which can produce color shifting when the display is tilted. This is a bit of an issue on the edge variant as I can see that the edges of the display appear somewhat green when viewed head on, but otherwise there are no real issues to be seen here. Overall, this is probably the best display anyone will be able to get in a smartphone right now. This level of progress is amazing from Samsung, given just how bad things were with the Galaxy S' AMOLED display, even as recent as the display of the Galaxy S4. With the Galaxy S5 review, I said that I wouldn't be surprised to see AMOLED equal, if not exceed LCD within a year or two, and Samsung has managed to finally hit that mark.