Performance consistency tells us a lot about the architecture of these SSDs and how they handle internal fragmentation. The reason we do not have consistent IO latency with SSDs is because inevitably all controllers have to do some amount of defragmentation or garbage collection in order to continue operating at high speeds. When and how an SSD decides to run its defrag or cleanup routines directly impacts the user experience as inconsistent performance results in application slowdowns.

To test IO consistency, we fill a secure erased SSD with sequential data to ensure that all user accessible LBAs (Logical Block Addresses) have data associated with them. Next we kick off a 4KB random write workload across all LBAs at a queue depth of 32 using incompressible data. The test is run for just over half an hour and we record instantaneous IOPS every second.

We are also testing drives with added over-provisioning by limiting the LBA range. This gives us a look into the drive’s behavior with varying levels of empty space, which is frankly a more realistic approach for client workloads.

Each of the three graphs has its own purpose. The first one is of the whole duration of the test in log scale. The second and third one zoom into the beginning of steady-state operation (t=1400s) but on different scales: the second one uses log scale for easy comparison whereas the third one uses linear scale for better visualization of differences between drives. Click the dropdown selections below each graph to switch the source data.

For more detailed description of the test and why performance consistency matters, read our original Intel SSD DC S3700 article.

Performance consistency has never been Phison's biggest strength and that continues to be the case with the S10 controller. The consistency is actually worse compared to the older S8 controller (i.e. Corsair Force LS) because the variance in performance is so high. I'm pretty sure the issue lies in Phison's garbage collection architecture as it doesn't seem to give enough priority for internal garbage collection, which results in a scenario where the drive has to stop for very short periods of time (milliseconds) to clean up some blocks for the IOs in the queue. That is why the performance frequently drops to ~1,500 IOPS, but on the other hand the drive may be pushing 70K IOPS the second after. Even adding more over-provisioning doesn't produce a steady line, although the share of high IOPS bursts is now higher.

For average client workloads, this shouldn't be an issue because drives never operate in steady-state and IOs tend to come in bursts, but for users that tax the storage system more there are far better options on the market. I'm a bit surprised that despite having more processing power than its predecessors, the S10 can't provide better IO consistency. With three of the four cores dedicated to flash management, there should be plenty of horsepower to manage the NAND even in steady-state scenario, although ultimately no amount of hardware can fix inefficient software/firmware.

To test TRIM, I filled the drive with sequential 128KB data and proceeded with a 30-minute random 4KB write (QD32) workload to put the drive into steady-state. After that I TRIM'ed the drive by issuing a quick format in Windows and ran HD Tach to produce the graph below. 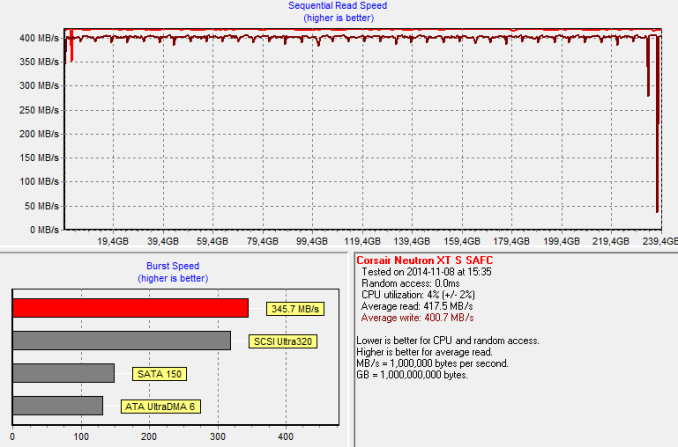 And TRIM works as expected.