Drive throughput with a queue depth of one is usually not advertised, but almost every latency or consistency metric reported on a spec sheet is measured at QD1 and usually for 4kB transfers. When the drive only has one command to work on at a time, there's nothing to get in the way of it offering its best-case access latency. Performance at such light loads is absolutely not what most of these drives are made for, but they have to make it through the easy tests before we move on to the more realistic challenges.

The Kingston DC500 SSDs offer similar QD1 random read throughput to Samsung's current SATA SSDs, but the Kingston drives require 35-45% more power. Samsung's most recent SATA controller platform has provided a remarkable improvement to power efficiency for both client and enterprise drives, while the new Phison S12DC controller leaves the Kingston drives with a much higher baseline for power consumption. However, the Samsung entry-level NVMe drive has even higher power draw, so despite its lower latency it is only as efficient as the Kingston drives at this light workload. 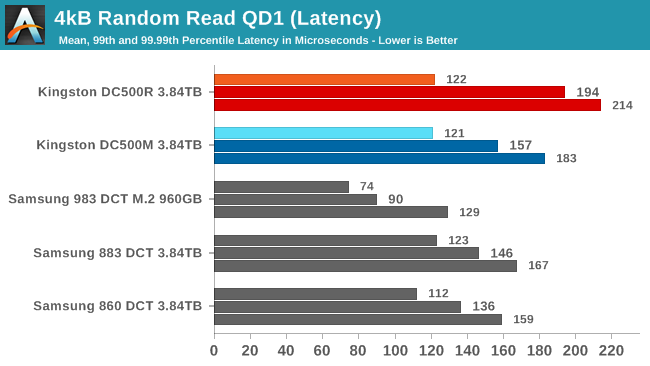 The Kingston DC500M has slightly better QoS than the DC500R for QD1 random reads, but both of the Samsung SATA drives are better still. The NVMe drive is better in all three latency metrics, but the 99th percentile latency has the most significant improvement over the SATA drives.

The Kingston drives offer 8-9k IOPS for QD1 random reads of 4kB or smaller blocks, but jumping up to 8kB blocks cuts IOPS in half, leaving bandwidth unchanged. After that, increasing block size does bring steady throughput improvements, but even at 1MB reading at QD1 isn't enough to saturate the SATA link.

The steady-state QD1 random write throughput of the DC500s is pretty good, especially for the DC500R that is only rated for 28k IOPS regardless of queue depth. At higher queue depths, the Samsung 883 DCT is supposed to reach the speeds the DC500s are providing here, but then the DC500M should also be much faster. The entry-level NVMe drive outpaces all the SATA drives, despite having a fourth the capacity.

The good random write throughput of the Kingston DC500s comes with a proportional cost in power consumption, leaving them with comparable efficiency to the Samsung drives. The DC500M was fractionally slower than the DC500R but uses much less power, probably due to the extra spare area allowing the -M to have a much easier time with background garbage collection. 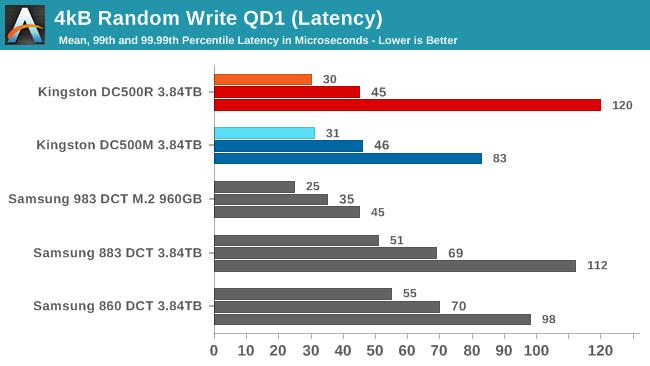 The latency statistics for the DC500R and DC500M only differ meaningfully for the 99.99th percentile score, where the -R is predictably worse off—but not too much worse off than the Samsung drives. Overall, the Kingston drives have competitive QoS with the Samsung SATA drives during this test.

The Kingston DC500R has oddly poor random write performance for 1kB blocks, but otherwise both Kingston drives do quite well across the range of block sizes, with a clear IOPS advantage over the Samsung SATA drives for small block size random writes and better throughput once the drives have saturated somewhere around 8-32kB.

The Kingston DC500s clearly aren't saturating the SATA link when performing 128kB sequential reads at QD1, while the Samsung drives are fairly close. We've noticed in our consumer SSD reviews that Phison-based drives often require a moderately high queue depth (or block sizes above 128kB) in order to start delivering good sequential performance, and that seems to have carried over to the S12DC platform. This disappointing performance really hurts the power efficiency scores for this test, especially considering that the DC500s are drawing a bit more power than they're supposed to for reads.

Performing sequential reads with small block operations isn't particularly useful, but the Samsung drives are much better at it. They start getting close to saturating the SATA link with block sizes around 64kB, while the Kingston drives still haven't quite caught up when the block size reaches 1MB—showing again that they really need queue depths above 1 to deliver the expected sequential read performance.

Sequential writes at QD1 isn't a problem for the Kingston drives the way reads were: the DC500M is a hair faster than the Samsung SATA SSDs and the DC500R is less than 10% slower. However, Samsung again comes out way ahead on power efficiency, and the DC500R exceeds its specified power draw for writes by 30%.

The DC500M and the Samsung 883 DCT are fairly evenly matched for sequential write performance across the range of block sizes, except that the Kingston is clearly faster for 512-byte writes (which in practice are basically never sequential). The DC500R differs from the -M by hitting a throughput limit sooner than the rest of the drives, and a bit lower during this test than the above 128kB sequential write test.