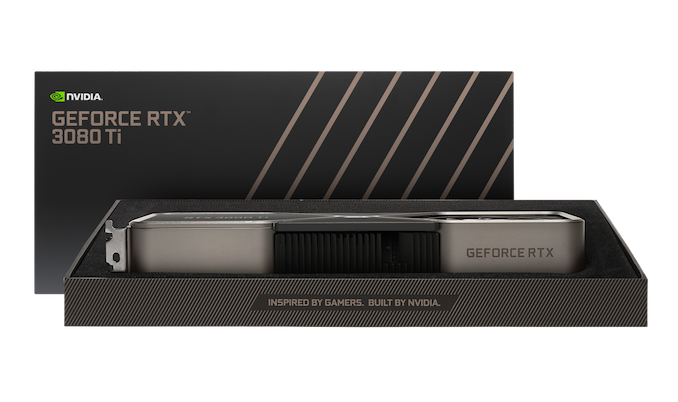 The second major keynote of the day for Computex comes from NVIDIA, who has taken to the virtual showfloor to discuss new products for both gamers and the enterprise market. On the gaming side of matters, the company is officially announcing its GeForce RTX 3080 Ti and RTX 3070 Ti cards. The refreshed GeForce cards will land in early June, further expanding the high-end of NVIDIA’s video card lineup.

The latest members of the GeForce family are arriving at a bit of an odd time. NVIDIA’s current lineup of high-end cards launched not even 9 months ago, so they’re not by typical metrics due for a mid-generation kicker, such as what we saw with 2019’s RTX 20 Super series. Nor is NVIDIA having any problem selling the cards they have – thanks to high demand they’re selling everything they make, and are making a nice profit margin while doing so. None the less, NVIDIA is using Computex to further expand the GeForce family lineup with two more cards, the RTX 3080 Ti and RTX 3070 Ti.

Both cards are based on existing GPUs and technologies, so with no intention of downplaying both cards, there’s nothing novel here. Instead, these cards give NVIDIA and its board partners a few more options to play with. And for the NVIDIA ecosystem, it allows NVIDIA to have some additional cards to position against AMD’s Radeon RX 6000 lineup.

Starting things off, we have the GeForce RTX 3080 Ti. NVIDIA is dubbing this card “the new gaming flagship,” and on the whole is treating it like a traditional xx80 Ti card, flagship status and all. That said, unlike the 2080 Ti and 1080 Ti, this is actually a slightly cut-down version of a better NVIDIA GeForce card that’s already on the market, the GeForce RTX 3090. So the whole matter is a bit awkward, and it comes with the impression that some part of NVIDIA would like to retroactively make the RTX 3090 a Titan card rather than a GeForce card. 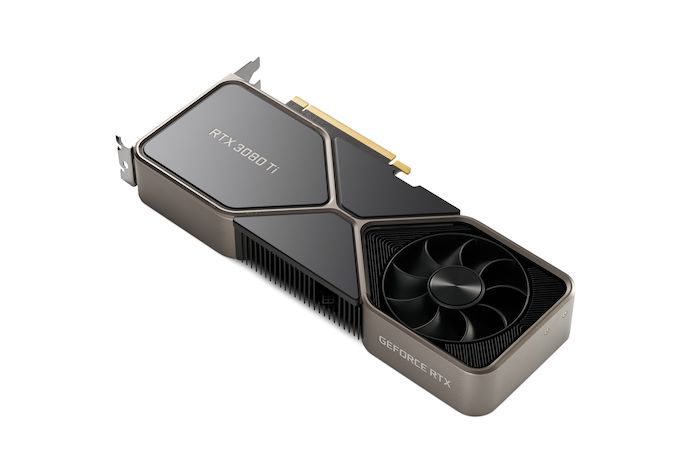 But weird product positioning aside, what isn’t up for debate is RTX 3080 Ti’s hardware credentials. For all practical purposes this is a cheaper RTX 3090 with half of the VRAM, will will make it a very potent video card for 4K gaming. NVIDIA is using the same GA102 GPU used in RTX 3090, disabling a couple more SMs, dialing down the clockspeeds a hair, and sending it out the door. The resulting card has 80 SMs enabled (10240 CUDA cores) and is clocked at 1.67GHz. On paper this gives it 96% of the RTX 3090’s compute/shader throughput and 98% of its pixel (ROP) throughput, which is virtually a rounding error in terms of GPU specifications.

It's on the memory side that we see a bigger difference, and this comes down to memory capacity. Whereas the RTX 3090 was a 24GB card, using 24 GDDR6X chips in a clamshell configuration, RTX 3080 Ti brings this down to 12 chips, and thus 12GB of VRAM. The memory clockspeed has also been turned down just a bit, bringing it down to 19Gbps. The net result is that RTX 3080 Ti has half the memory and 97% of the memory bandwidth of RTX 3090.

Finally, it also comes with RTX 3090’s TDP: 350 Watts. Though system builders and others with slightly more cramped systems will be happy to hear that, at least for the NVIDIA Founders Edition cards, they are using the same dual slot cooler as on the RTX 3080, and not the enormous cooler that came with the RTX 3090.

As far as performance is concerned, given that the RTX 3090 frequently only beats the RTX 3080 by 10-15%, the margin for the RTX 3080 Ti will almost certainly be the same, if not slimmer. So like the RTX 3090 before it, gamers are going to be paying top dollar for the last 10% or so that NVIDIA’s high-end hardware before it. 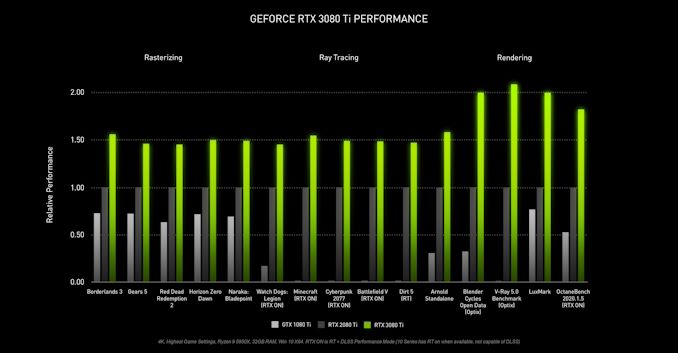 Meanwhile, within NVIDIA’s product lineup, they are pitching the RTX 3080 Ti as the successor to the RTX 2080 Ti and GTX 1080 Ti. Which is certainly more than fair in terms of performance and price. At this point I’m not sure how much the card really changes the consumer calculus there; the $1199 price tag is a lot more in line with the 2080 Ti than the RTX 3090’s $1499 price tag was. On the other hand, I can’t see too many RTX 20 series owners upgrading to the 30 series, which is why NVIDIA typically pitches these cards as upgrades for owners of cards that are two generations old.

At the very least, for consumers who’ve been wanting an RTX 3090 and balking at the price tag, this in theory should be a much more affordable option. So long as you don’t exceed the 12GB VRAM pool, then I expect the performance of the RTX 3080 Ti to all but match that of a video card $300 more expensive. 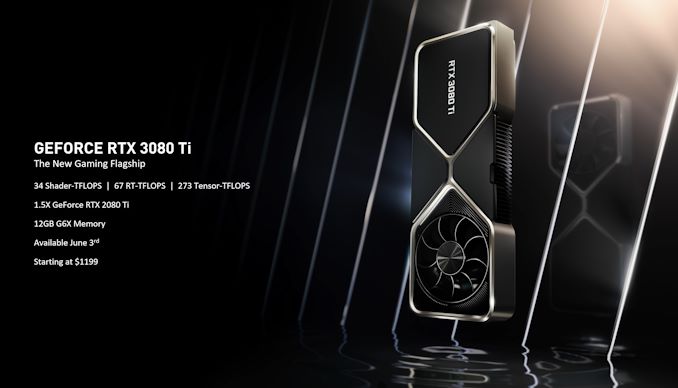 The second – and arguably more interesting – card that NVIDIA is announcing today is the GeForce RTX 3070 Ti. Unlike the RTX 3080 Ti, this card doesn’t have quite such a close sibling within NVIDIA’s current product stack. The supercharged RTX 3070 card, which is once again based on the GA104 GPU, essentially gets all the performance NVIDIA left in the tank at launch. This means enabling all 48 SMs, and upgrading the VRAM from GDDR6 to GDDR6X, giving GA104 access to its fullest performance and memory bandwidth capabilities. 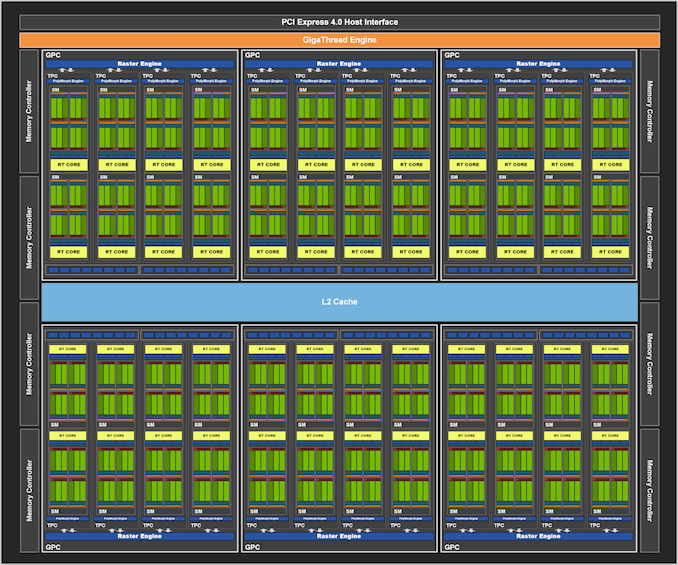 This extra performance does come at a cost however: power requirements. Whereas the RTX 3070 was a 220W TDP card, RTX 3070 Ti adds to this significantly, bringing the TDP to 290W, and only 30W less than the RTX 3080. This sizable jump in power requirements comes despite a relatively modest increase in the SM count and clockspeeds, which raises the question of where exactly the power is going. The most likely culprit would seem to be GDDR6X, as its modest power savings over GDDR6 tend to get wiped out by its much higher clockspeeds. Though I’m also curious if NVIDIA binning isn’t also playing a part, and that they’re either hitting the steep part of GA104’s voltage/frequency curve, or if they’ve just loosening binning entirely to allow leakier chips to qualify for RTX 3070 Ti (and perhaps save more good chips for laptops). 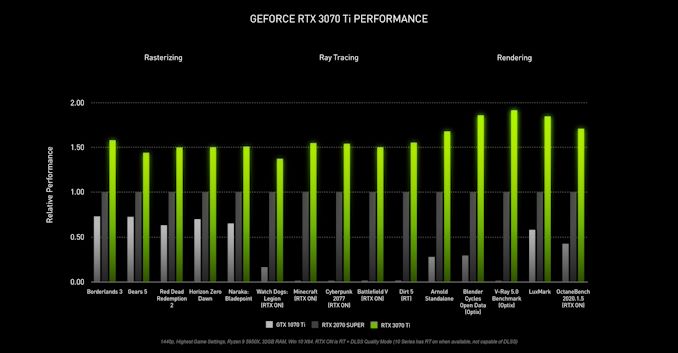 With regards to performance, it’s hard to say at this point how the RTX 3070 Ti will compare to either the RTX 3070 or RTX 3080. xx70 cards are normally aimed at 1440p gaming, and NVIDIA doesn't seem to be changing this approach for the RTX 3070 Ti. Meanwihle the $599 MSRP card is in theory 20% more expensive than the RTX 3070, so it really needs to deliver at least that much of a performance boost to fully justify itself. Then again, when the next card above that is the $699 MSRP RTX 3080, the RTX 3070 Ti offers a slightly more reasonable option when it comes to nominal pricing.

Otherwise, on a generational basis, NVIDIA is pitching the card as the successor to the RTX 2070 Super an GTX 1070 Ti. Again, I don’t really expect RTX 20 series owners to pay it much attention, but GTX 1070 owners may find the card slightly more to their liking than the original RTX 3070, thanks in big part to its GDDR6X memory. 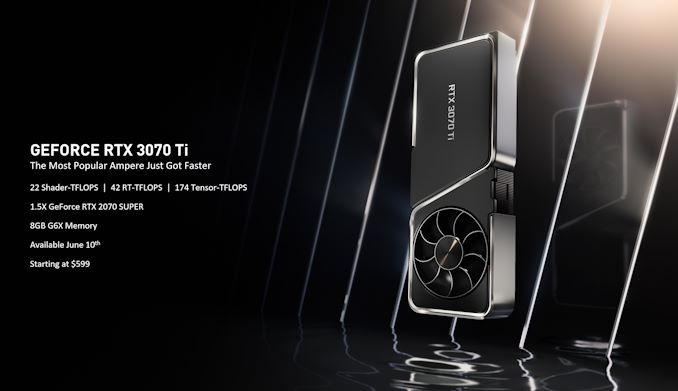 One consequence of the launch of the new RTX 30 series cards – and particularly NVIDIA positioning the RTX 3080 Ti as their new gaming flagship – is that NVIDIA is effectively ceding the matter of memory capacity to AMD. The red team offers 16GB of VRAM on all of their Radeon 6800/6900 cards, giving all of them a capacity advantage over NVIDIA’s new flagship card. Thus far we haven’t seen 16GB of VRAM make of break things versus NVIDIA’s bigger 10GB+ cards, but as we’re still well less than half-way through the current video card generation – and just at the start of the new console generation – there’s plenty of time for that to change.

Meanwhile things definitely become murkier with the 16GB versus 8GB comparison, as 8GB cards are all that much closer to running out of VRAM. At this point NVIDIA seems to be making a very calculated bet that 8GB of VRAM will be enough for even a $600 video card for a while yet to come. And that customers don’t especially mind that VRAM capacity has essentially remained paused for NVIDIA for the past 5 years.

Speaking of competitive positioning, these new cards also give NVIDIA a more closely positioned answer to AMD’s high-end video card lineup. Whereas previously the next step above the $579 RX 6800 vanilla was the $699 RTX 3080, now there is the $599 RTX 3070 Ti. Similarly, the RX 6900 XT is now boxed in at the top by the $1199 RTX 3080 Ti, and not the $1499 RTX 3090. Given the wild state of the video card market, without internal sales numbers it’s pretty much impossible to determine if the lack of more similarly-priced cards has had any meaningful impact on NVIDIA’s sales. But given the cards that make up today’s release, it certainly seems like price/positioning was a factor.

It also bears mentioning that NVIDIA’s prices will be “starting at” prices. The company’s board partners, who are already very familiar with the GPUs, TDPs, and memories involved, are all producing their own custom cards to fill retail and etail channels. So expect to see the usual significant variety of cards, with AIB partners opting for higher margin, factory overclocked cards when possible.

Of course, all of this is at nominal, MSRP pricing. In reality for the last half a year now we have been dealing with a market run amok due to high consumer demand being compounded by even more demand from cryptocurrency miners. These new GeForce cards are going to have the same 50% Ethereum hash limiter as the LHR RTX 3080/3070 cards, so they won’t be quite as lucrative to miners as the pre-LHR cards. Still, it’s far from guaranteed that this will be enough to entirely deter miners, at least as long as the payout from Ethereum mining remains decent. This is especially the case for the RTX 3070 Ti, as it’s now the cheapest card that NVIDIA offers with GDDR6X memory.