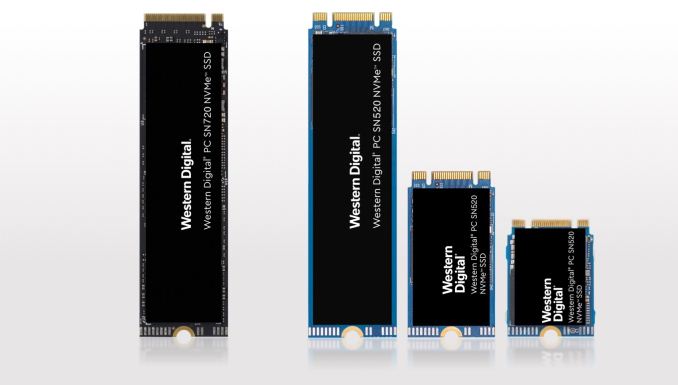 Western Digital has announced their first client NVMe SSDs with their SanDisk 64-layer 3D TLC NAND. These drives are also the first to feature Western Digital's new in-house NVMe SSD controllers. This is a major shift in strategy away from third-party controllers (mostly Marvell) toward complete vertical integration.

The new SSDs are called the Western Digital SN720 and Western Digital SN520. Branding for these is a bit of a mess with the drives bearing the Western Digital name and model numbers that almost fit in with the HGST Ultrastar SN200 and SN260 enterprise NVMe SSDs, but the product information is on the SanDisk website and the target market is similar to that of SanDisk's business/OEM drives like the X400 and X600 SATA SSDs. Western Digital may be trying to unify and simplify their several brands, but it's a work in progress.

The Western Digital SN720 is a high-end client NVMe SSD with a PCIe 3 x4 connection and capacities from 256GB to 1TB, with a 2TB model on the way. Aside from sequential reads, the performance of the 256GB model is a bit unimpressive, but the 512GB and larger models appear on paper to be better than the Toshiba XG5-P or Samsung 960 EVO, and close to the Samsung 960 PRO in some respects.

The Western Digital SN520 is a low-end client NVMe SSD with just a two-lane PCIe link and no external DRAM. The SN520 will be available in M.2 card lengths from 30mm up to the normal 80mm, though in all sizes only the first 30mm of the PCB are actually used. The SN520 will be available in smaller capacities than the SN720, from 128GB to 512GB. Sequential throughput is limited by the PCIe x2 link, and random access performance is lower than the SN720: The 128GB SN520's random read and write performance are about what SATA SSDs advertise. The 256GB SN520 is very close to the random access performance of the 256GB SN720, but at 512GB the SN520 is well behind the SN720.

In spite of its limitations, the SN520 may end up beating the Western Digital WD Black NVMe SSD on most benchmarks, thanks to the better performance of SanDisk's 64L 3D TLC as compared with the 15nm planar TLC used by the WD Black. 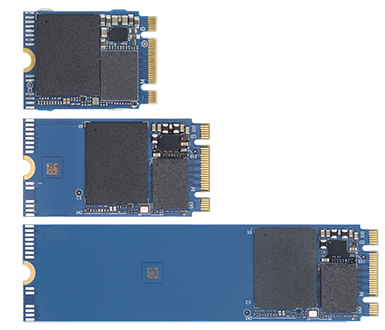 At the heart of these new products are Western Digital's first in-house NVMe SSD controllers. Western Digital isn't providing much information about the shared controller architecture used by these products, but we have a bit of information. The controllers are manufactured on a 28nm process, which is the same node that most other high-end NVMe controllers for the consumer market uses. The controllers support 8 channels for NAND access and have a DDR4 DRAM controller. The choice of DDR4 instead of LPDDR4 is probably more cost-effective for Western Digital since they do not manufacture their own DRAM, but it may also hurt the power efficiency of the SN720 somewhat: LPDDR4 seems to be a major factor in the big jump in efficiency Samsung's 860 PRO and 860 EVO show over their 850 generation.

The SN520 doesn't have any external DRAM and Western Digital won't say what kind or quantity of memory is in the controller package itself, but there's a good chance the SN520 has its DRAM controller deactivated. The SN520 may also be operating with just 4 NAND channels, similar to other low-end NVMe controllers like the Silicon Motion SM2263 and Phison E8. Western Digital did confirm that the SN520 does not use the NVMe Host Memory Buffer feature that alleviates the worst performance problems of DRAMless SSDs, but if there's some on-controller memory then HMB isn't necessary.

The Western Digital SN720 and SN520 are currently sampling to select customers. The time frame for volume availability has not been announced. Until now, Western Digital has taken a very reluctant approach to NVMe for non-server applications. With the launch of their in-house controllers, this is sure to change. These two tiers of client NVMe SSDs for the business/OEM markets will give Western Digital broad coverage of those markets, lacking only a fully-integrated BGA SSD solution. We expect consumer-oriented derivatives of at least one of these two products to come to the retail market this year, but Western Digital hasn't said anything official about any such plans.